SEOUL, Jan. 10 (Yonhap) -- LG Energy Solution Ltd. could overtake its Chinese rival and the world's No. 1 player CATL in share of the global electric vehicle (EV) battery market, given the apparent higher order backlog and other factors, its chief said Monday.

Kwon Young-soo, CEO of the South Korean battery maker, made the remarks in an online press conference on its upcoming listing, highlighting that his company has an upper hand in terms of intellectual properties and diversity in the foreign client pool.

"We overwhelm the competitor in IPs, and we have more diverse clients in the U.S. and Europe, and production bases there to supply our products to those clients, which CATL doesn't have," Kwon said.

"I believe that the backdrop to CATL's growth is that Chinese automakers have preferred locally produced batteries, or the policy to use them," Kwon said. "Since we have more orders, we predict that we will be higher than CATL in terms of market share in the future."

LG Energy Solution trailed CATL in the market share by 21 percent to 32 percent as of November last year, according to local market tracker SNE Research.

LG Energy Solution, which supplies batteries to Tesla, Hyundai Motor, General Motors, among many others, has a cumulative order backlog worth about 260 trillion won (US$217 billion).

The battery maker is preparing an initial public offering (IPO) on the main KOSPI market, in what would be South Korea's largest IPO ever expected to raise as much as 12.75 trillion won.

Regarding the post-IPO prospects, the battery maker expects to achieve "more than double-digit operating margins" and at least about 25 percent growth given the order backlog and various other cost-cutting strategies it plans to execute going forward, Kwon added.

With IPO proceeds, LG Energy Solution said in regulatory documents it plans to spend 8.84 trillion won to boost its domestic and overseas production, including 5.6 trillion won for its Holland plant in Michigan, the United States, and 1.4 trillion won for the Wroclaw plant in Poland.

Kwon hinted that any new battery plant in Europe, if decided, would be announced as a joint venture deal with an automaker outside of Poland.

"We plan to actively use this material. Since we've developed it before, we will apply it to the ESS (energy storage system) and then to electric vehicles in the future," Kwon said.

The iron-based LFP batteries' strength is in thermal stability, compared with the lithium ion batteries that use nickel, cobalt and manganese. This has attracted automakers following a series of fires in lithium ion battery-powered EVs that have resulted in recalls.

LG Energy Solution was embroiled in U.S. General Motor's recall of its Bolt EVs after its batteries used in the vehicles caused fires. The case delayed its IPO process last year, resulting in the battery maker to set aside 711 billion won for the recall costs. 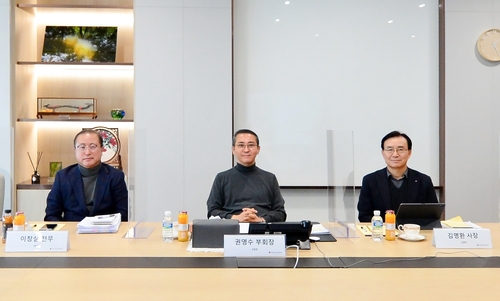