SEOUL, Jan. 11 (Yonhap) -- Main opposition presidential candidate Yoon Suk-yeol pledged Tuesday to offer parents a 1 million-won (US$837) monthly allowance for one year after the birth of their child to help tackle the country's low birth rate.

Yoon of the People Power Party made the promise during a New Year's press conference, saying the program should "free people from the economic burden of having children" at relatively little cost to the government, as only 260,000 babies are born a year. 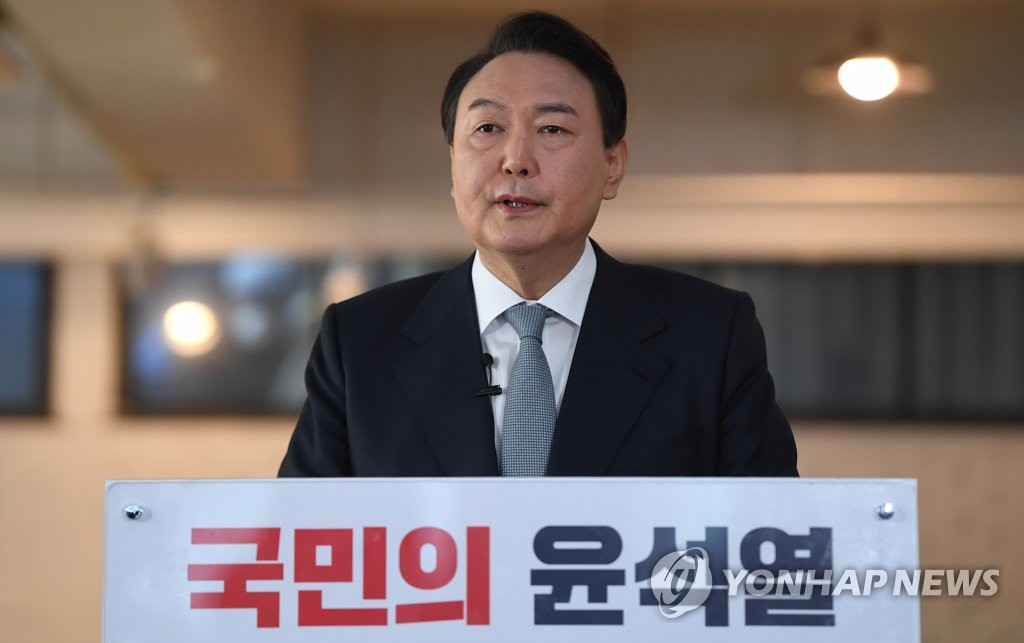 South Korea has suffered from a chronically low birth rate as many young people have delayed or given up on getting married or having babies amid a prolonged economic slowdown and high housing prices.

During the press conference, which was held at a factory-turned-cafe in eastern Seoul, Yoon also said he will push for the creation of a new ministry to comprehensively handle social issues related to children, families and the population.

When asked if the new ministry will replace the Ministry of Gender Equality and Family, which he has pledged to abolish, Yoon dismissed the notion.

"I mean that I will view our social issues from a broader perspective and respond (accordingly)," he said.

Yoon also announced his vision for a rent-sharing program for small businesses hit by the pandemic.

Under the program, small business owners will have to pay only a third of the rent on their premises, and the landlord and the government will each cover a third.

More specifically, landlords will be required to cut their rent by a third, and the government will compensate 20 percent of the difference through tax deductions and repay the rest after the pandemic is over.

Meanwhile, tenants will pay the remaining two-thirds through bank loans and get a 50 percent deduction on rent and utility payments when they repay the loan. The government will then cover the rest, according to Yoon.

"The state will actively take part in sharing the suffering caused by COVID-19 and rescue self-employed people from the edge of the cliff," he said.

When asked by reporters how much he expects the program to cost, Yoon said the total is estimated at around 50 trillion won, starting at least three years from now.

On health issues, Yoon said he will launch a post-COVID-19 response team and introduce a program under which the state covers the cost of essential medical services.

"Even if a bigger medical catastrophe strikes, I will make sure the people are not left anxious and shedding tears of blood due to a shortage of ICUs and emergency rooms," he said.

On North Korea's repeated missile tests, the candidate emphasized the importance of deploying the "three-axis" defense system, including the Kill-Chain preemptive strike platform, to respond in the event that North Korea's missiles pose a direct threat to the South.