SEOUL, Jan. 12 (Yonhap) -- President Moon Jae-in will use his trip to the Middle East later this week to explore opportunities for South Korean businesses in hydrogen, defense and other industries, a Cheong Wa Dae official said Wednesday.

Moon is set to depart Saturday for an eight-day trip to the United Arab Emirates, Saudi Arabia and Egypt.

"The three nations are our traditional friendly states in the Middle East and Arab world and strategically important countries that play a key role for stable global energy supply chains and maritime logistics," the senior official told reporters. 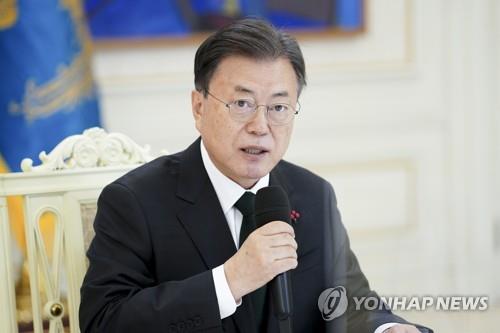 On the first leg of the trip, Moon will visit the UAE from Sunday and attend a bilateral business roundtable on cooperation in the hydrogen industry before meeting with the country's Prime Minister Sheikh Mohammed bin Rashid Al Maktoum, according to the official.

During the talks, Moon plans to discuss cooperation in hydrogen, climate change and space.

The same day, the president is scheduled to attend a "Day of Korea" ceremony at the Expo 2020 Dubai and campaign to bring the international event to South Korea's southeastern city of Busan in 2030.

South Korea has previously said it is pushing to sell its mid-range surface-to-air missiles known as M-SAM to the UAE.

After the UAE, Moon will visit Saudi Arabia on Jan. 18-19 to hold talks with Saudi Arabia's de facto ruler Crown Prince Mohammed bin Salman and to attend a business forum.

In Riyadh, Moon plans to announce the start of free trade agreement negotiations with the Gulf Cooperation Council.

On Jan. 20-21, Moon will visit Egypt for summit talks with President Abdel Fattah el-Sisi and to attend a roundtable on eco-friendly businesses.

The two sides plan to agree to launch joint research into a bilateral free trade agreement, South Korea's first with an African state.