Lee of the liberal Democratic Party gained 1 percentage point from last week, while Yoon of the conservative People Power Party stayed put, according to the poll conducted on 1,000 adults from Monday to Wednesday by Embrain Public, Kstat Research, Korea Research and Hankook Research.

In two other surveys published Wednesday, Yoon led Lee within the margin of error. 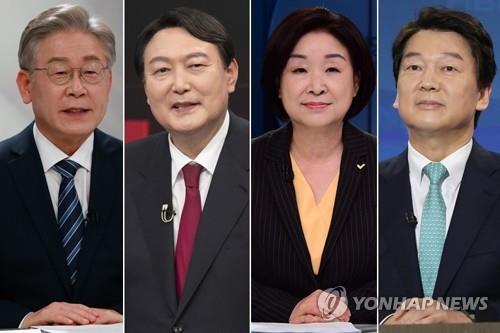 Among voters aged 18 to 29, an age group considered to hold the swing vote, Lee and Yoon earned 21 percent each, followed by Ahn at 16 percent and the undecided at 33 percent.

Asked who is likely to win the March 9 election, 48 percent chose Lee, while 27 percent picked Yoon.

Among Lee's supporters, 43 percent said they support him for his ability and qualifications, while among Yoon's supporters, 70 percent cited their wish for a change of government.

Of Ahn's supporters, the most cited reason was that they do not want any of the others to get elected, at 33 percent.

When asked which candidate appears to be the strongest on the economy, Lee led with 43 percent, followed by Yoon (18 percent), Ahn (15 percent) and Sim (2 percent).