Trading volume was moderate at about 597 million shares worth some 11.3 trillion won (US$9.5 billion), with losers outnumbering gainers 449 to 412. 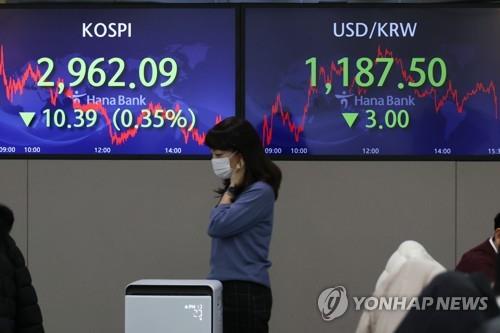 Stocks got off to a muted start as the U.S. consumer price index increased 7 percent in December, the highest on-year jump in almost four decades.

Overnight, the tech-heavy Nasdaq composite inched up 0.23 percent and the Dow Jones Industrial Average rose 0.11 percent, as the inflation woes have been largely on stock prices.

The Seoul stock market increasingly lost ground in the afternoon, joining the other Asian stock markets.

"The latest keyword in the market is the pace of the Fed's tapering and rate hikes," Eugene Investment & Securities analyst Huh Jae-hwan said.

"Investors are not buying into a radical pace of tapering, but the high inflation rates will need some time to cool. Stocks lacked momentum for additional gains," he said.

LG Electronics surged 6.2 percent to 145,500 won after reports that it will supply an infotainment system to Mercedes-Benz's EQS model.

The local currency closed at 1,187.5 won against the U.S. dollar, up 3 won from the previous session's close.

Bond prices, which move inversely to yields, closed higher. The yield on three-year Treasurys lost 4.5 basis points to 1.953 percent, and the return on the benchmark five-year government bond fell 2.8 basis points to 2.159 percent.