The South Korean video hit the milestone at about 4 p.m., the Pinkfong Company said, adding that it became the first video in the world ever to pass the 10 billion mark in YouTube views.

The song had an overwhelming lead over the runner-up, the music video for Luis Fonsi and Daddy Yankee's megahit "Despacito," which has secured 7.7 billion views. 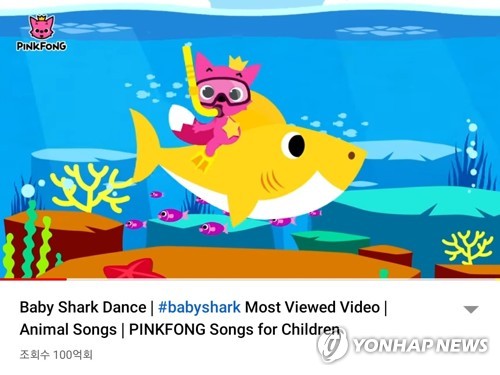 The "Baby Shark" song, which was first released in June 2016 as part of the Pinkfong children's song series, has become a global phenom with its catchy tune and addictive lyrics, "Baby shark, doo, doo, doo, doo, doo, doo."

The song set a new Guinness World Records title as the most-viewed video on YouTube by garnering 7 billion views in November 2020 and has since stayed on the throne for 15 consecutive months.

Pinkfong said 10 billion is a huge number that surpasses the world's population of 7.8 billion announced by the United Nations Population Fund (UNFPA).

By simple calculation, the number of views could show that all people living on Earth have seen the video at least once, it added.