GWANGJU, Jan. 14 (Yonhap) -- Search and rescue operations resumed at an apartment building collapse site in the southwestern city of Gwangju for a fourth day Friday.

According to the Gwangju Fire and Safety Headquarters, the search for six missing persons resumed at 7 a.m. with 71 rescue workers aided by 43 instruments and eight rescue dogs. 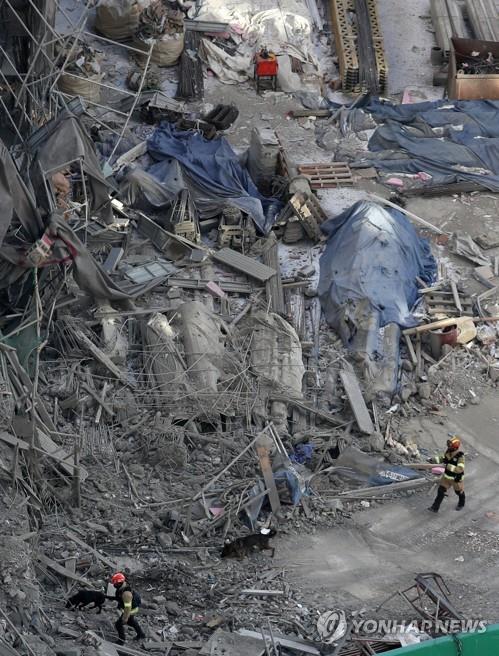 Three workers were rescued in the initial search operation, with one of them sustaining injuries from falling rubble. But six who were working on upper floors of the building went missing.

One person was found trapped near the handrail of a set of stairs on the first basement floor Thursday, and rescue workers were trying to remove concrete debris and iron wires to save him, the fire headquarters said, adding he may be one of the six people unaccounted for. It is still unknown whether he is alive or dead.

The agency expects the search and rescue operations to take a considerable amount of time due to a heap of fallen objects. Heavy objects were being lifted with heavy equipment, and rescue workers were dismantling reinforcing bars.

The agency said an intensive search was under way on the 22nd, 25th, 26th and 28th floors, where the rescue dogs responded. 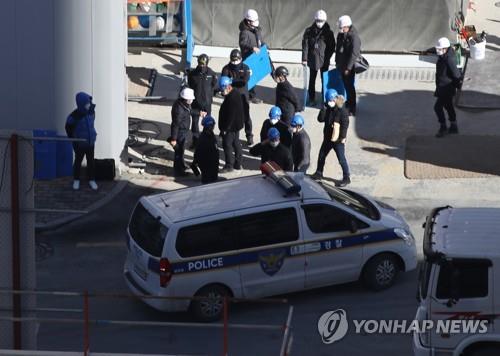 In a related move, police and the labor ministry jointly conducted a raid on the field office of HDC Hyundai Development Co., the main contractor of the apartment project, and other relevant places.

Officials from the Gwangju Metropolitan Police Agency and the Gwangju Regional Employment and Labor Office visited HDC's field office and a supervision office at around 2 p.m. to seize documents on their possible violations of construction and safety regulations.

The chief of the HDC field office and an official from a subcontractor in charge of concrete frame works have already been booked on charges of violating the Building Act and the Occupational Safety and Health Act. Police have also imposed an exit ban on key figures related to the construction project.

Officials of HDC and its subcontractors have reportedly denied responsibility, saying the construction work and supervision had been carried out normally.