GWANGJU, Jan. 14 (Yonhap) -- Rescue workers recovered one person trapped under rubble at the site of an apartment building that collapsed in the southwestern city of Gwangju on Friday, but his fate is not yet known.

The unidentified man, presumed to be one of six missing workers, was recovered near the handrail of stairs on the first basement floor of the damaged building in Gwangju, about 330 kilometers south of Seoul, as search and rescue operations continued for the fourth day. The person was taken to a hospital. 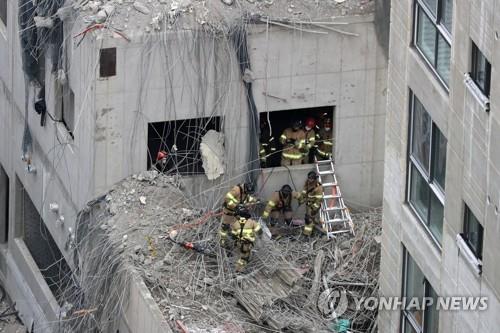 Three workers were rescued in the initial search operation on Tuesday, with one of them sustaining injuries from falling rubble. But the six who were working on upper floors of the building went missing.

Authorities expects the search and rescue operations to take a considerable amount of time due to a heap of fallen objects. Heavy objects were being lifted with heavy equipment, and rescue workers were dismantling reinforcing bars.

Officials said an intensive search was under way on the 22nd, 25th, 26th and 28th floors.