SEOUL, Jan. 14 (Yonhap) -- A court on Friday decided to allow a local TV station to broadcast parts of the main opposition presidential candidate's wife's phone calls, while other parts will be banned.

Kim Keon-hee, the wife of Yoon Suk-yeol, earlier filed an injunction to stop MBC from airing recordings of her phone conversations with a staff member of the YouTube channel Voice of Seoul last year. The broadcast was set for Sunday.

The Seoul Western District Court, which deliberated on the arguments of both sides earlier in the day, said it has made the decision in consideration of Kim's on-going investigation.

Kim is currently under investigation in connection with a stock manipulation case surrounding Deutsch Motors Inc., a BMW car dealer in South Korea.

"If (Kim) undergoes an investigation or probe in the future, the broadcast could significantly infringe on her right to refuse to make statements, which is guaranteed under the criminal procedure," the court said in a statement.

But the court also noted that as Kim is considered a public figure, the broadcast of parts of the recording falls in line with the common good.

The court did not provide details on which parts of the recording were banned from being aired.

The recordings, running some seven hours, reportedly contain criticism of the Moon Jae-in government and remarks on some politically sensitive issues.

Kim previously came under fire for allegedly falsifying her credentials on job applications and issued a public apology at the party's headquarters. 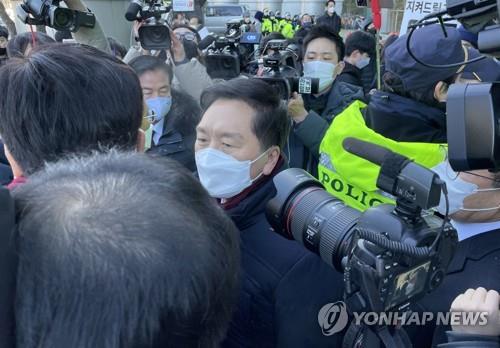