SEOUL, Jan. 14 (Yonhap) -- A former U.S. Forces Korea (USFK) chief said Friday that North Korea's recent self-proclaimed hypersonic missile launches, if true, can be a reason for South Korea and the United States to be "very concerned," citing the absence of "sure means" to counter them.

Curtis Scaparrotti, who led the USFK from 2013-2016, made the remarks after Pyongyang claimed to have successfully test-fired hypersonic missiles on Jan. 5 and Tuesday.

South Korea's military has assessed that the North's missile launched this week flew at a top speed of Mach 10, 10 times the speed of sound, while the missile fired last week traveled at Mach 6.

"If the speed of those missiles is true ... and the maneuverability, which was the concern on the first one, (but) it wasn't in the second one where it supposedly demonstrated decent maneuverability," Scaparrotti said during a virtual security forum hosted by the Institute for Corean and American Studies.

"Then, we have reason to be very concerned because at this point, we don't have sure means of defending against hypersonic missiles given their maneuverability, in particular their speed," the former general added.

Asked to clarify if the South Korea-U.S. alliance is not ready to counter such a hypersonic missile, Scaparrotti said, "We are as ready as anybody else."

"We think these were just at its test (phase) and like most everyone else, we're all on a period of trying to refine our capabilities here," he said.

Touching on the North's continued quest for new weapons like a submarine-launched ballistic missile (SLBM), Scaparrotti said that the reclusive regime has moved "much faster" than expected.

"They test differently. They've always surprised us with the advance they make and the time that they make it … so we need to be concerned," he said.

In response to a question about South Korea's regional security role amid an intensifying Sino-U.S. rivalry, the former commander called for the Asian ally to be "more active" and to be clear about "where they draw lines."

"I do think they should play a stronger role. I think actually, they ought to be more active with the capacity and the capabilities and their forces in international exercises in the Pacific, be more present in those than they are now," he said.

"I know they're cautious and I expect them to be cautious, but I also would tell you that I think they must be clear about their security interests and where they draw lines, particularly with respect to China." 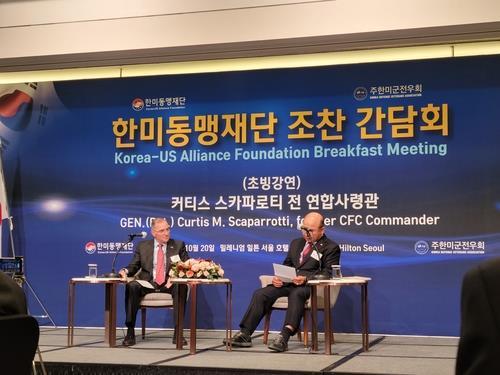 Former USFK chief says N.K. hypersonic launches, if true, can be reason to be 'very concerned'

Former USFK chief says N.K. hypersonic launches, if true, can be reason to be 'very concerned'