SEOUL, Jan. 14 (Yonhap) -- An unfriendly letter that a high school girl wrote to a soldier in the mandatory military service surprised many this week, not only because of the letter's sarcastic tone but also due to the fact that the practice of having students send thank-you letters to troops still exists.

In a nation facing a belligerent North Korea across the world's most heavily fortified border, writing letters to soldiers used to be a fixture for students in South Korea, especially elementary school pupils, when Cold War tensions were high until the late 1980s.

Not many people believed that such a letter-writing campaign still exists, until this week's disclosure of the letter that a student at a girls' high school in western Seoul wrote to an anonymous soldier apparently out of frustration she had to write such a letter as part of a school requirement.

"Is it hard to do your military service? Even if so, work hard. There will be many hardships in your future. Don't you think you can only call yourself a real man if you overcome a hardship like this?" the student wrote in the letter dated Dec. 30.

"I am having a hard time as a soon-to-be high school third grader too but am participating in this damn task," she wrote, referring to the letter-writing campaign. "It's cold out there, but if it snows, work hard to clean it up."

Far apart from usual thank-you notes to soldiers, the letter sparked criticism that she jeered and taunted innocent soldiers in the compulsory military service, in which all able-bodied men in South Korea are required to carry out for about two years.

The student and some of her school mates were subject to cyberbullying, with angry people pouring malicious and sexually derogatory comments online against them and some others even trying to expose the identifies of the school girls.

Students have reportedly claimed they were practically forced to write the letters. But the school claimed that letters were written by those who wished to do so and the event was meant to raise awareness on the importance of national security and deliver gratitude to soldiers. 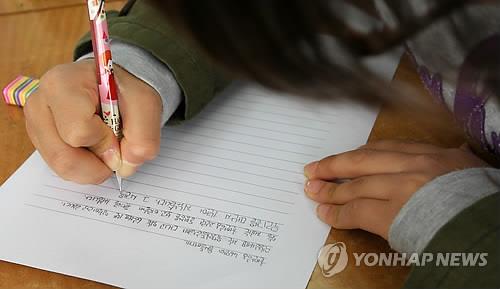 The case has given rise to calls for an end to such letter-writing campaigns.

On Wednesday, a petition calling for the abolition of such events at girl's high schools was posted on the presidential office Cheong Wa Dae's website, garnering the support of more than 120,000 people as of noon on Friday.

The petitioner said it is inappropriate for school girls to write letters of comfort for soldiers who are mostly adult men and can be dangerous for the writers if their personal information is exposed.

A similar petition was posted on the Seoul Metropolitan Office of Education's website as well, receiving over 20,000 people's support.

"We know writing such letters rarely takes place in public schools these days as there has been criticism on why young girls have to send letters of comfort to older soldiers, as well as their coercive and undemocratic nature," an official of the education office said.

But it is difficult to check whether schools, especially private ones, are holding such letter-writing campaigns, the official added.

The recent event shows that there is still a sentiment that "obedient and nice girls" should write friendly letters to boost the morale of soldiers working hard for the country, WeTee, a civic group of teenagers advocating for the improvement of women's rights, said in a statement.

The practice of writing letters was more prevalent in girls' high schools and led to cases of sexual harassment in the past, WeTee said.

Some online commentators said, however, that the problematic letter was disrespectful to soldiers protecting the country and students should be better educated to show respect to them.