In a survey conducted by Realmeter, Yoon of the main opposition People Power Party (PPP) overtook Lee of the ruling Democratic Party (DP) as frontrunner with 40.6 percent vs. 36.7 percent.

Two other polls, released by Next Research and Embrain Public, showed Lee maintaining his lead over Yoon.

In the Realmeter poll conducted on 3,031 adults from Jan. 9 to 14, Yoon gained 6.5 percentage points from the previous week, while Lee lost 3.4 points.

In the previous survey, Lee was ahead of Yoon by a margin greater than the margin of error. 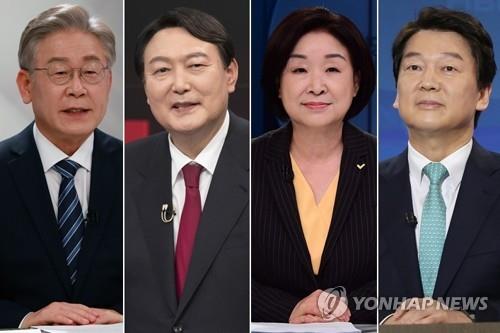 Realmeter said the reversal was likely due to a series of developments favorable to Yoon, including the resolution of a feud inside the PPP campaign committee and the abrupt death of an activist who raised corruption allegations against Lee.

In the hypothetical scenario of Yoon and Ahn merging candidacies and Yoon emerging as the unified candidate, Yoon had 45.2 percent support, followed by Lee at 37 percent and Sim at 3.8 percent.

With Ahn as the unified candidate, Ahn had 42.2 percent support, followed by Lee at 34.3 percent and Sim at 3.2 percent.

Asked to pick the candidate most likely to win, 46.2 percent chose Lee, while 41.9 percent picked Yoon and 5.7 percent Ahn.

Lee's rating was down 6.6 percentage points, while Yoon's was up 7 points.

Later in the day, Next Research and Embrain Public released their results showing Lee still ahead of Yoon.

The difference between Lee and Yoon was within the margin of error of plus or minus 3.1 percentage points.

The survey has a margin of error of plus or minus 2.7 percentage points.