INCHEON, Jan. 17 (Yonhap) -- Police said Monday they were looking into a report of a suspected animal abuse attempt using sausage-skewered fishhooks at a park in Incheon popular among dog owners.

Police said they received the report of the suspicious fishhooks in the park in Bupyeong Ward of Incheon, 40 kilometers west of Seoul, at 9:45 p.m. Sunday. Authorities said they searched the park but failed to discover the hooks in question.

The fishhooks were first made public by a dog owner who discovered them at the park and posted a photo on Instagram on Sunday.

"I found sausages lying around among leaves on the ground and dug into the ground thinking something was strange," the person wrote. The user described the sausages as being fixed to fishhooks and the connected fishing lines tied to a nearby tree.

The person explained the park was popular among dog owners and insisted the placement of the fishhooks was apparently "not by mistake but a malicious act." The user claims to have collected and discarded the fishhooks to prevent any accidents from happening. 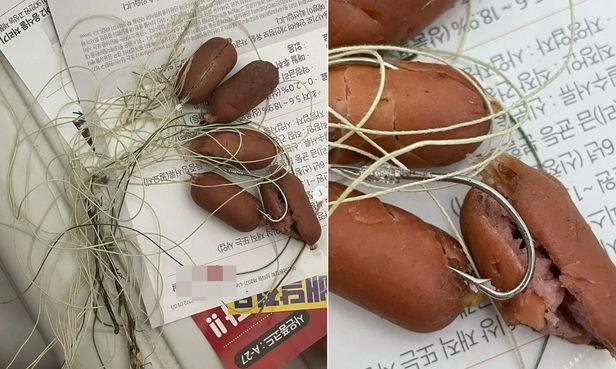