Trading volume was moderate at about 571 million shares worth some 9.8 trillion won (US$8.2 billion), with losers outnumbering gainers 745 to 158. 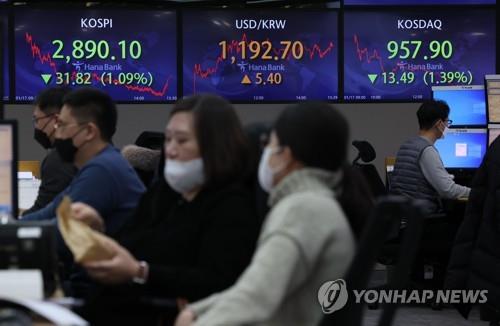 After a weak start, the key stock index fell below the 2,900-point level intraday for the first time in about six weeks and the losses extended later amid concerns over rising inflationary pressure at home and in the United States.

Last week, central banks in major countries, including the Bank of Korea and the U.S. Federal Reserve, hinted at the possibility of aggressive monetary tightening this year.

Ahead of the South Korean battery maker's IPO set for this month, investors were cashing in on overvalued stocks to join the process.

"The Fed's hawkish policy issue is also having its sway on the markets," he added.

Most large caps closed lower in Seoul, led by foreign and institutional sell-offs.

The local currency closed at 1,192.7 won against the U.S. dollar, down 5.4 won from the previous session's close.

Bond prices, which move inversely to yields, closed lower. The yield on three-year Treasurys rose 10.4 basis points to 2.148 percent, and the return on the benchmark five-year government bond added 11.2 basis points to 2.351 percent.