SEOUL, Jan. 18 (Yonhap) -- The ruling and main opposition parties on Tuesday gave conflicting accounts of when their presidential candidates will have their first one-on-one TV debate.

The ruling Democratic Party (DP) announced first that its candidate Lee Jae-myung will face off against People Power Party (PPP) candidate Yoon Suk-yeol at 10 p.m. on Jan. 27 for a 120-minute debate jointly hosted by the three terrestrial TV stations KBS, MBC and SBS.

The PPP later countered that Jan. 27 was simply suggested by the broadcasters as an ideal date and instead proposed Jan. 31, or Lunar New Year's Eve, when families traditionally gather for dinner.

"We believe it will be best to have the debate at a golden hour if possible," PPP Rep. Sung Il-jong said at a press conference at the National Assembly, referring to the hours from 6 p.m. to 10 p.m. "Many people will be sleeping after 10 p.m., so wouldn't it be best to avoid that hour?"

The PPP also demanded the rival parties negotiate to pick a moderator.

The DP had said earlier that the broadcasters also requested a four-way debate between Lee, Yoon, Ahn Cheol-soo of the minor opposition People's Party and Sim Sang-jeung of the minor progressive Justice Party after the Lunar New Year holiday.

Lee has accepted the request, it said, asking the other three to also participate. 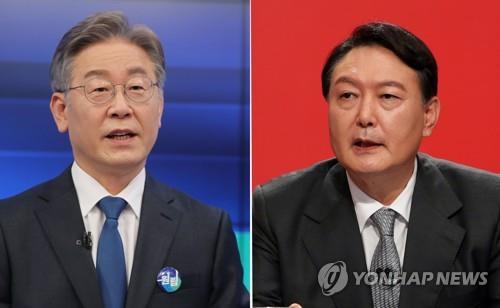