SEJONG, Jan. 20 (Yonhap) -- A leading economic index for South Korea fell for the fifth consecutive month in December, pointing to a slowdown in Asia's No. 4 economy down the road, data showed Thursday.

The composite leading indicator (CLI) of economic activity for South Korea stood at 101.2 for December, down 0.09 point from the previous month, according to the data from the Organization for Economic Cooperation and Development (OECD).

The index for South Korea had been contracting since August following 15 straight months of gains. Yet the December tally was still above the benchmark 100, which separates expansion from contraction.

The CLI gauges how an economy will fare four to six months ahead, based on industrial output, gross domestic product, and housing and financial market conditions. 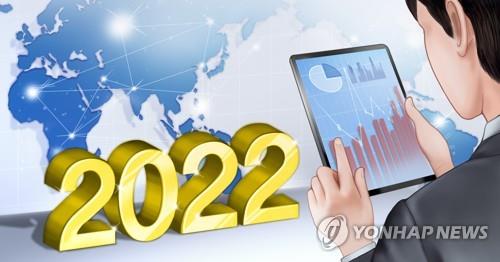 "The downtick in the OECD index suggests that the recovery pace of the economy could lose ground slightly in the coming months," said Jung Kyu-chul, a senior researcher at the state-run Korea Development Institute.

The December drop came amid signs that major economies are slowing following their rapid post-pandemic recoveries, which is feared to have a negative impact on South Korea's exports.

The average CLI for OECD member nations came to 100.5 in December, down 0.06 point from the prior month and marking the fifth straight month of declines.

South Korea's exports swelled 18.3 percent on-year to reach a monthly high of US$60.74 billion in December, marking the 14th straight month that the country's exports have extended gains.