SEOUL, Jan. 20 (Yonhap) -- Public broadcaster MBC said Thursday it has decided not to air the second portion of controversial recorded phone conversations between the wife of main opposition presidential candidate Yoon Suk-yeol and a reporter.

MBC's investigative program "Straight" on Sunday broadcast the first part of the seven-hour conversations Yoon's wife Kim Keon-hee had with a staff member of the YouTube channel Voice of Seoul between July and December last year. It had planned to release the second part this Sunday.

"We've been working on the issue for a follow-up report given great social repercussions after the first one. After reviewing many conditions, including time needed to collect materials and broadcasting quantity, however, we've decided not to air the related story on Jan. 23," MBC said in a release.

Earlier this week, Kim filed for a court injunction seeking to stop MBC from airing the second part, after Sunday's report, including her remark that #MeToo movements occur when men do not pay victims, sparked widespread controversy and political wrangling. The court ruling was scheduled for Friday.

Kim's side said that MBC disregarded her repeated requests to secure her right of reply, and the airing would be illegal as the phone conversations were private.

MBC said that it will serve the public interest and help voters evaluate the wife of a major presidential candidate, vowing to include Kim's stance in the upcoming episode in case she makes additional requests.

Before Sunday's broadcast, Kim filed an injunction against MBC, and the court ruled that it can air parts of the conversations, excluding those related to authorities' ongoing investigations into her, as her remarks are a matter of public concern and will serve as a chance for the people to evaluate the candidate's wife. 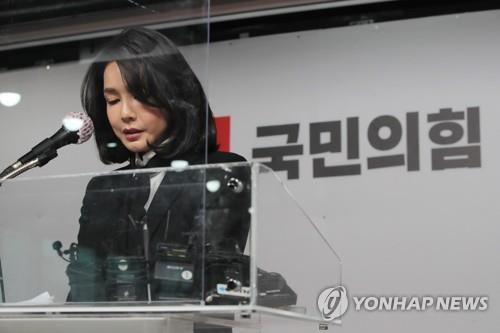