SEOUL, Jan. 21 (Yonhap) -- South Korea's exports grew 22 percent on-year in the first 20 days of January on the back of solid demand for chips and petroleum products, customs data showed Friday.

The country's outbound shipments stood at US$34.4 billion in the Jan. 1-20 period, compared with $28.22 billion a year earlier, according to the data from the Korea Customs Service.

Imports jumped 38.4 percent on-year to $40.1 billion, resulting in a trade deficit of $5.63 billion during the cited period, the data showed. 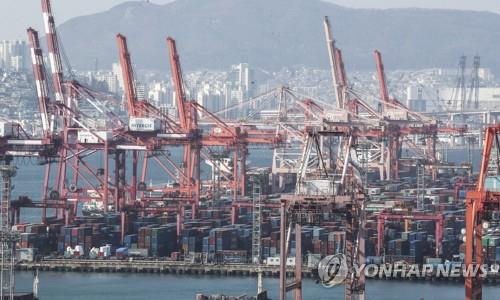 Exports of petroleum products spiked 84 percent amid high global oil prices, and sales of home appliances in overseas markets more than doubled during the period. Shipments of autos also advanced 22.8 percent, according to the data.

Exports, which account for half of the local economy, have buttressed the country's economic recovery.

Last year, the country's exports grew 25.8 percent to reach an all-time high on the back of solid demand for chips and petroleum products amid a global economic recovery.

The Bank of Korea forecast Asia's fourth-largest economy will expand 3 percent this year, and the International Monetary Fund (IMF) forecast a 3.3 percent growth.