Lee of the liberal Democratic Party (DP) made the proposal only hours after the Cabinet endorsed a 14 trillion-won extra budget for the same purpose to be submitted to the National Assembly for approval.

The amount of 35 trillion won was initially proposed by the PPP days ago during a meeting between party and government officials. 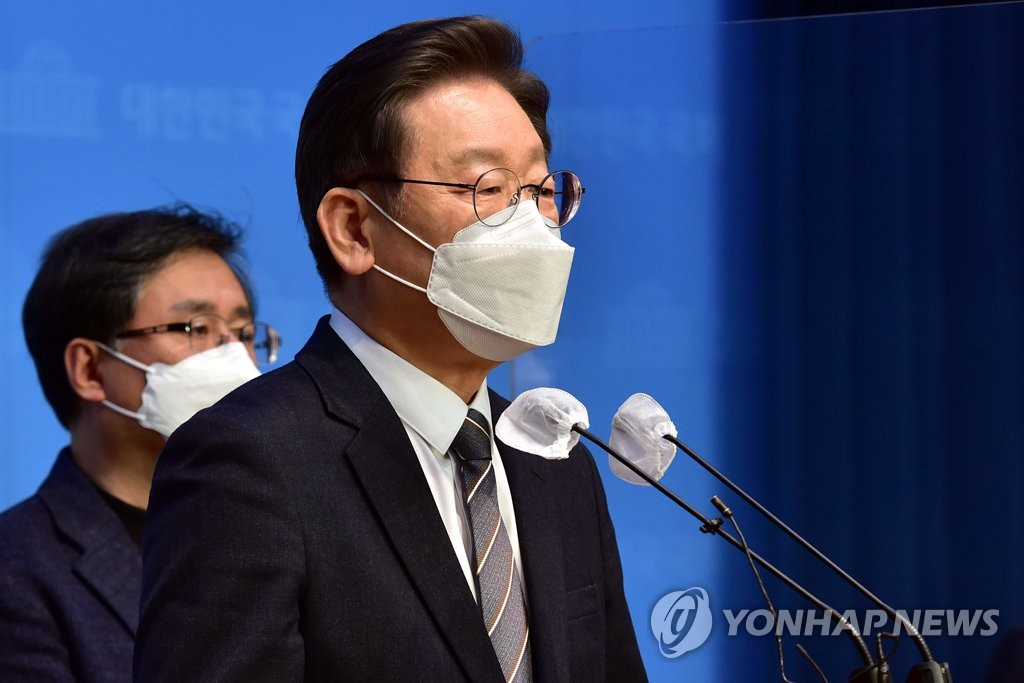 "I agree with and welcome 100 percent an extra budget of 35 trillion won as suggested by the People Power Party to support small merchants and the self-employed," Lee said during a press conference at the National Assembly.

"I propose an emergency meeting to all presidential candidates to allow us to swiftly support small merchants and the self-employed with 35 trillion won from the next administration's coffers," he said.

Lee spoke after presiding over a COVID-19 response meeting held by his party and noted that the government could only draw up a plan for 14 trillion won despite the DP's request for 30 trillion won because of opposition concerns about the national debt and accusations of vote-buying ahead of the March 9 presidential election.

Lee recalled that it was the PPP's suggestion to fund the extra budget plan by adjusting the government's expenditures, not by issuing bonds, and called for delegating the decision-making responsibility to the next administration once it takes office in May.

When asked which candidates he was referring to, Lee said anyone the public believes has a chance of winning the election could qualify.

He added, however, that he hopes PPP candidate Yoon Suk-yeol will not "backtrack" as he did previously after suggesting an extra budget of 50 trillion won.

Later in the day, Yoon raised doubts about the sincerity of his proposal.

He told reporters that the government is supposed to create a budget bill and send it to the National Assembly for the parties' consideration.

"What I am saying is that the ruling party must persuade the president and bring a proper extra budget bill," he said.

"People may doubt the sincerity of this kind of action taken ahead of the presidential election," he said referring to Lee's proposal.

Lee also said party officials agreed at Friday's meeting to propose a transition to a "scientific, logical and flexible" antivirus policy aided by digital and information technology to respond to the spread of omicron, a variant he said is expected to be less lethal.

Specifically he said digital technologies can be used in detecting COVID-19 patients and managing people who have come into close contact with the patients.

He also proposed considering relaxing business curfews for people who have received their booster vaccine shots.