CHEONGJU, South Korea, Jan. 21 (Yonhap) -- One worker died and three were injured in a fire at a battery materials factory in the central city of Cheongju on Friday, firefighters said.

The blaze broke out on the fourth floor of the six-story building of cathode materials manufacturer EcoPro BM Co., in the city 140 kilometers south of Seoul, at around 3 p.m.

About 30 people were inside the facility at that time and most of them escaped the scene.

Among four employees who were on the fourth floor, two were rescued immediately and one jumped off the building sustaining a serious injury. They were sent to a nearby hospital.

The remaining one person was found dead at 6:24 p.m., the fire authorities said. 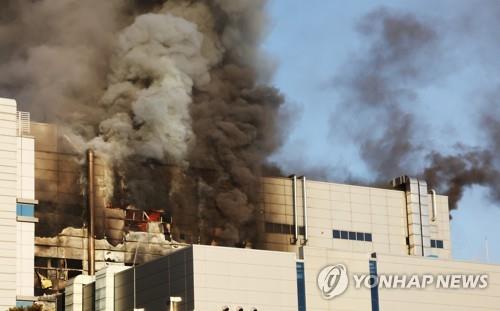 Firefighters said explosions in the boiler room on the fourth floor may have sparked the fire.

A worker at an adjoining factory said there were two explosions before the flames swept the building. Video footage recorded by the worker showed thick smoke billowing following a blast.

The firefighters and police are looking into the exact cause of the fire.

The authorities said there were some unidentified chemicals inside the factory. It was not confirmed whether they are toxic.

A total of 44 fire engines and trucks and 125 firefighters were sent to the scene.