ULSAN, Jan. 24 (Yonhap) -- Firefighters have been trying overnight to put out a blaze that broke out at a synthetic fiber manufacturing factory in the southeastern city of Ulsan on Sunday, authorities said.

The fire broke out at 6:55 p.m. at a combined seven-story factory of Hyosung TNC Corp. and has not been contained for over 11 hours, according to the Ulsan Fire Department.

Two of the factory's workers were sent to a hospital after inhaling smoke while trying to extinguish the fire at an early stage.

The fire is assumed to have started on the first basement floor and spread to upper levels and a nearby storage warehouse, firefighters said.

Ulsan Fire Department has mobilized a total of 650 firefighters, and 80 fire engines and trucks to contain the blaze in cooperation with fire authorities of neighboring areas of the city of Busan and Gyeongsang Provinces. 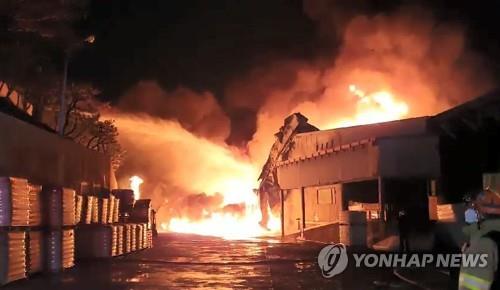