SEOUL, Jan. 24 (Yonhap) -- Seven confidants of ruling party presidential candidate Lee Jae-myung said Monday they will not take any appointed post even if Lee is elected, as they appealed for support for Lee amid sluggish support.

Lee called their pledge a "willingness of our determination to reflect on ourselves and start anew."

With opinion surveys showing that about 50 percent of voters are leaning toward ending the liberal rule of President Moon Jae-in, Lee has distanced himself from Moon's policies.

On Monday, Lee admitted that the Moon administration and the ruling Democratic Party (DP) were "insufficient" in their real estate policy that has been cited as the biggest source of disapproval.

Before announcing campaign pledges for Gyeonggi Province, where he served as the governor, Lee and accompanying DP lawmakers made a deep bow.

"As a member of the DP and a presidential candidate, I take a bow again to apologize," Lee told reporters.

Earlier in the day, a survey showed Yoon is leading Lee with 42 percent support against Lee's 36.8 percent.

Yoon of the People Power Party (PPP) gained 1.4 percentage points from the previous week, while Lee of the DP edged up 0.1 point, according to the Realmeter survey conducted on 3,046 adults from Jan. 16 to 21. 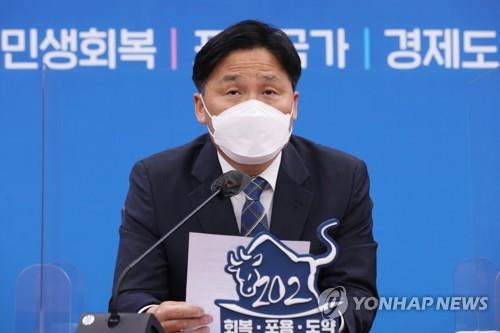 (LEAD) 7 Lee confidants pledge not to take any appointed post

(LEAD) 7 Lee confidants pledge not to take any appointed post