Moon also sent a letter of gratitude to Xi, and they agreed to further develop bilateral ties as this year marks the 30th anniversary of establishing diplomatic ties between the two nations, according to Moon's spokesperson Park Kyung-mee.

Moon, who turned 70 on Monday, is working from home until Tuesday in accordance with antivirus protocols as he returned home Saturday from an eight-day trip to the United Arab Emirates, Saudi Arabia and Egypt.

Seoul and Beijing are reportedly in talks to arrange a virtual summit between Moon and Xi in the runup to the Beijing Olympics next month.

But officials here expressed skepticism the summit will be held before the Games' opening ceremony on Feb. 4 due to a lack of time to coordinate the agenda, especially amid ongoing tensions between China and the United States.

"We can't prejudge the outcome because we're still in communication with the Chinese side, but for now, it appears a summit will be difficult to arrange at an early date," a government official said on condition of anonymity.

Moon visited China in 2017 and 2019, but Xi's agreed-upon reciprocal trip has been postponed due to the pandemic. 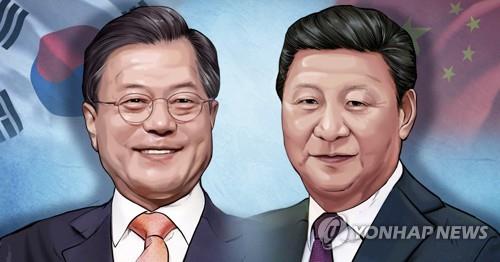