The former prosecutor general representing the conservative People Power Party (PPP) announced his campaign pledges on national security and foreign affairs focused on achieving the complete denuclearization of North Korea and strengthening the alliance with the U.S.

"I will strengthen the comprehensive strategic alliance between Korea and the U.S. by rebuilding the alliance that has collapsed over the past five years," Yoon told reporters at the PPP headquarters in Seoul.

He vowed to normalize the allies' joint military drills, which the Moon Jae-in administration has scaled down to forge an atmosphere for dialogue with North Korea.

He also pledged to ensure the normal operation of a U.S. base in Seongju that hosts the Terminal High Altitude Area Defense (THAAD) system to shoot down North Korean missiles.

Yoon and Lee Jae-myung of the Democratic Party (DP) are running neck-and-neck ahead of the presidential election scheduled for March 9. 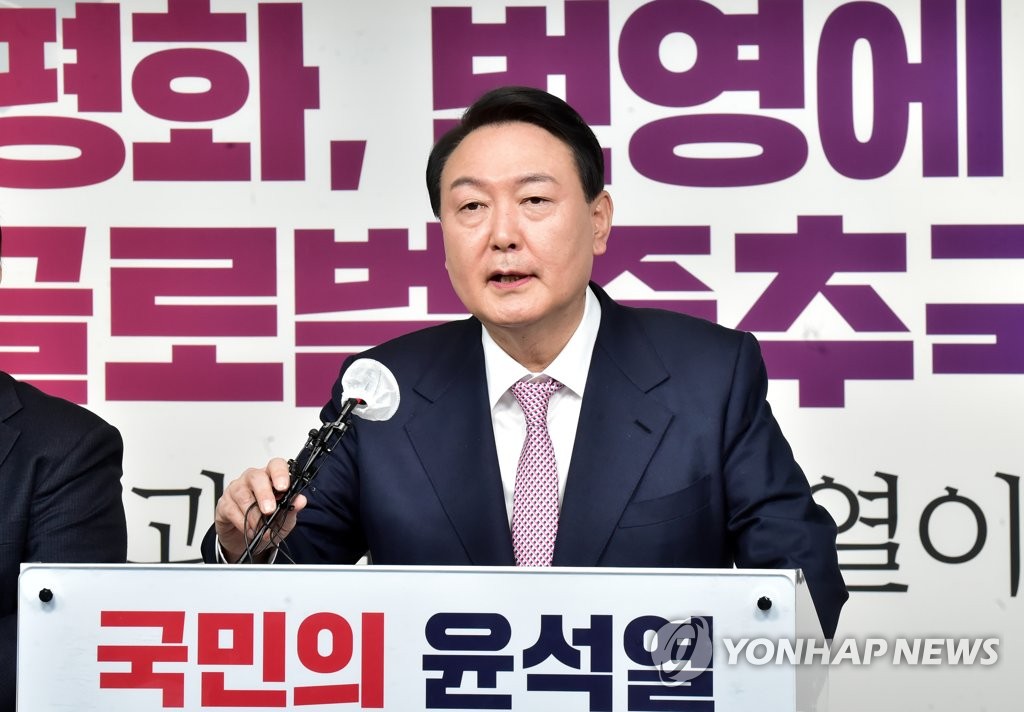 "I will pursue peace not through subservience but through powerful national defense capability," he said.

"In order to protect the lives and safety of the people from North Korea's nuclear and missile attacks, I will spur the establishment of the Korean three-axis system, which includes Kill Chain, and upgrade cutting-edge combat capabilities, including surveillance and reconnaissance assets," he added.

The three-axis system consists of the Kill Chain pre-emptive strike platform, the Korea Air and Missile Defense system (KAMD) and the Korea Massive Punishment and Retaliation (KMPR) operational plan aimed at incapacitating the North Korean leadership in a major conflict.

He reiterated the need to deploy U.S. strategic assets, including long-range bombers, aircraft carriers and nuclear submarines, in case of an emergency and vowed to strengthen the allies' capabilities for extended deterrence through regular exercises and high-level consultations.

"North Korea has been upgrading its nuclear capabilities and is making blatant provocations, such as hypersonic missile tests. The DP administration's Korean Peninsula peace process has completely failed," he said.

He slammed President Moon for pushing for the declaration of a formal end of the Korean War while neglecting the goal of North Korea's denuclearization, which Yoon said is a prerequisite for peace and security on the Korean Peninsula.

Yoon said he would seek to resume nuclear talks with North Korea based on a predictable denuclearization road map, a reciprocity principle and close cooperation between South Korea and the U.S.

To facilitate the negotiations, he would push to establish a permanent three-way dialogue channel among the three countries at Panmunjom on the inter-Korean border or in Washington D.C.

"If North Korea actively engages in efforts for a complete and verifiable denuclearization, we will prepare a peace agreement between the two Koreas and provide full economic support and cooperation," he said.

International sanctions against the North should be maintained until its complete denuclearization, but economic support through U.N. sanctions relief is possible if the North takes practical measures for the goal, he said.

Humanitarian aid to the North will be provided without considering political situations, he said. Yoon also promised he would not tolerate human rights abuses in North Korea.

He offered a plan to build a South Korea-U.S. technology alliance to cope with challenges to economic security.

"I will upgrade (South Korea-U.S. relations) to an alliance that leads global innovation in semiconductors, batteries, artificial intelligence, bio, 6G, atomic power, aerospace and other fields," he said.

He vowed to actively participate in cooperation among democratic countries in the Asia-Pacific region to establish a "free and open" regional order.

"(South Korea) will work closely with allies and friendly countries to ensure the freedom of navigation and flight, and revitalize multilateral cooperation in the region," he said.

"I will pursue cooperation with related countries in the region by participating in vaccines, climate change and new technology working groups under the Quad partnership between the United States, Japan, Australia and India."
(END)