Lee Geum-min and Ji So-yun each had a goal in the second half of the teams' Group C match at the Asian Football Confederation (AFC) Women's Asian Cup at Shree Shiv Chhatrapati Sports Complex in Pune, India.

South Korea beat Vietnam 3-0 to open the tournament last Friday. They will close out the group stage against Japan, the two-time defending champions, on Thursday, back at Shree Shiv Chhatrapati Sports Complex. Barring an epic Vietnamese upset of Japan later Monday, South Korea's two straight wins should send the country into the quarterfinals as one of the top two teams in Group C.

There are three groups of four in the group stage. The top two nations from each group and the two-best third-place teams will make up the quarterfinals.

Coached by Colin Bell, South Korea are trying to win the Women's Asian Cup for the first time. The country's best performance so far is the third-place finish in 2003.

South Korea, world No. 18, thoroughly dominated the run of play against Myanmar, the lowest-ranked team in Group C at No. 47. But South Korea couldn't convert their ball possession advantage into meaningful offense until the second half. 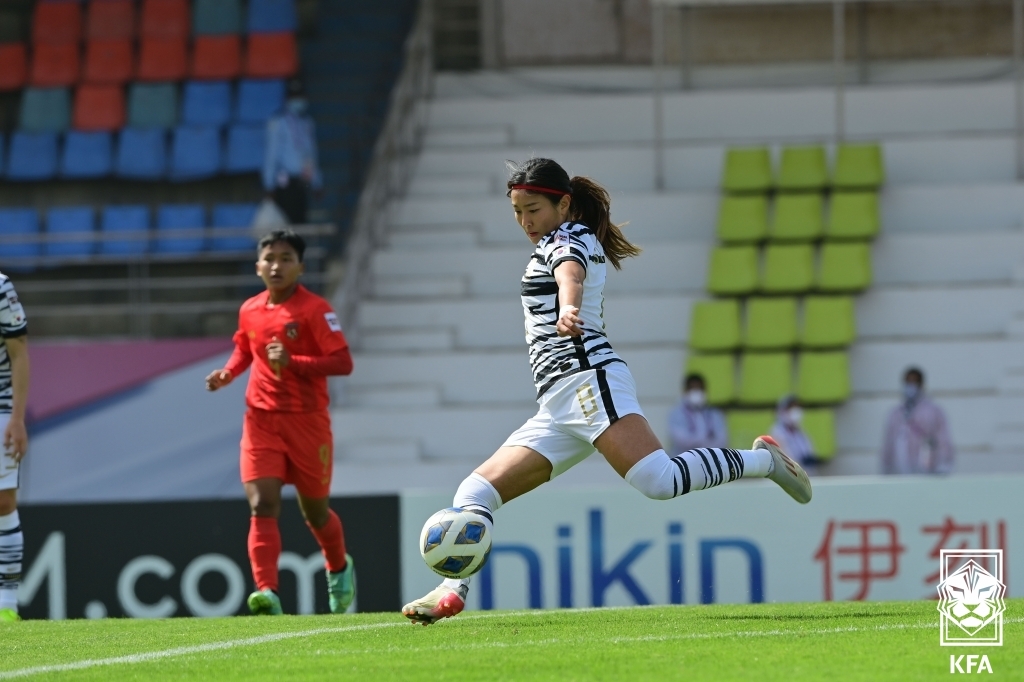 Lee's volley in the 50th minute opened the scoring. Positioned well inside the box, Cho So-hyun headed down a long pass from midfield and Lee caught the ball with her knee before shooting it past goalkeeper May Zin Nwe.

Ji then scored her third goal of the tournament in the 83rd minute. Nwe got a piece of Ji's header but the ball bounced off the right post and just crossed the goal line.

This tournament is doubling as the Asian qualification event for the 2023 FIFA Women's World Cup. The top-five teams in India will book their spots at the biggest event in women's football, and two more teams will advance to the intercontinental playoffs.