SEOUL, Jan. 25 (Yonhap) -- Ruling party presidential candidate Lee Jae-myung pledged Tuesday to provide a basic income of up to 1 million won (US$836) to residents of farming and fishing villages if elected in March.

Lee of the liberal Democratic Party announced the pledge at a press conference in Pocheon, 46 kilometers north of Seoul, as he canvassed voters in Gyeonggi Province for a third day.

Lee said he will increase the agriculture and fisheries industries' share of the government budget to 5 percent and conduct development projects to improve housing, education and facilities for senior citizens in rural neighborhoods.

"The Lee Jae-myung administration will recognize the importance of the agriculture industry, and actively protect and develop it by including it in the national growth strategy," he said.

Lee pledged to establish "money-making energy villages" to produce and sell renewable energies and return all proceeds to farmers in the form of a pension.

He also said he will foster the agriculture sector from the perspective of food security and aim to achieve a food self-sufficiency rate of 60 percent. 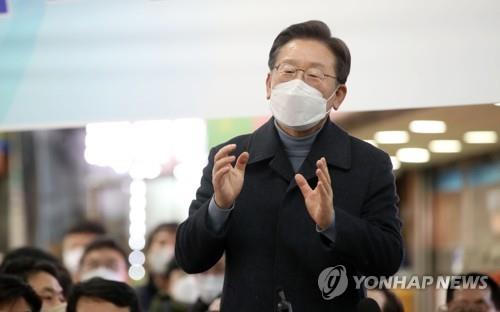