Yoon of the conservative People Power Party made the remarks while announcing his election pledges on the environment and agriculture at the party's headquarters in Seoul.

Yoon said he, if elected president in March, will do his utmost to reduce fine dust pollution by abolishing the Moon Jae-in government's policy to phase out nuclear energy and expediting the reduction of coal-fired power generation as much as possible. 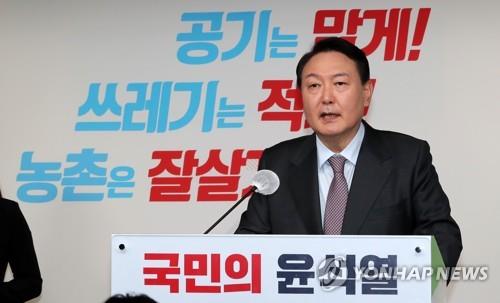 The candidate said he will slash the proportion of electricity generation from coal and other fossil fuels from 60 percent to 40 percent during his term, while expanding the share of renewable and nuclear energy.

He also vowed to lower the upper limit for the operation of coal power plants, which may generate high concentrations of ultrafine particles, from the current 80 percent to 50 percent.

In addition, Yoon said he will install air purifiers that can remove both fine dust and viruses at all elementary, middle and high schools nationwide, and strengthen the indoor air standard for multiuse facilities, such as subway stations, from less than 50 micrograms per cubic meter to less than 40 micrograms.

In the agricultural sector, Yoon said he will double the government budget for the direct payments to farmers to 5 trillion won (US$4.17 billion), raising the average direct payment per farmer to 5 million won.

Addressing the labor shortage in the agriculture sector, the candidate said he will extend short-term work visas for migrant workers from the current three to five months to three to nine months.

Under the goal of nurturing 30,000 young farmers, he said, public farmland, such as reclaimed land, and public housing in rural new towns will be allocated first to young people.