SEOUL, Jan. 25 (Yonhap) -- The wife of main opposition presidential candidate Yoon Suk-yeol submitted false records of her academic and career background on a job application sent to a local university in 2014, the education ministry said Tuesday following an inquiry.

Kim Keon-hee, the wife of the nominee of the conservative People Power Party, has been hit with allegations that she exaggerated her credentials on multiple resumes, including one for a teaching job at Kookmin University, which she ultimately secured.

The education ministry launched an inquiry into the university in November to look into the circumstances surrounding her hiring as an adjunct professor, her earning of a degree from the university's Graduate School of Techno Design and the university's acquisition of stocks in Deutsch Motors Inc., a local BMW car dealer suspected of having ties to Kim. 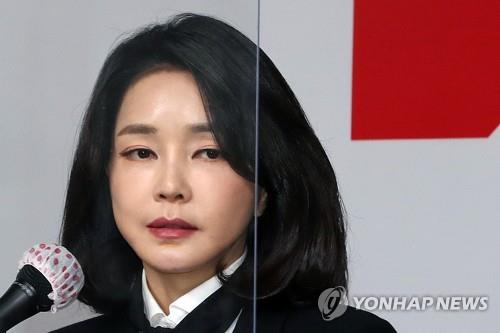 In announcing the results of the probe, the ministry said the university failed to notice the errors on Kim's application, such as the exact title of the master's degree she earned from a different university and the teaching titles she held at another institution.

The ministry revealed irregularities in the university's evaluation of her doctoral thesis, which it said was supposed to be carried out by at least an assistant professor but was instead done by a lower-level instructor, among others.

The ministry demanded the university verify Kim's academic and career background as stated on her resume and take necessary measures in line with its hiring regulations, which include the cancellation of an appointment upon discovery of false statements during the hiring process.

It also plans to demand warnings against 13 university professors and staff members over the irregularities in both the hiring and the thesis evaluation, and issue a separate warning to the university itself.

The ministry said it found the university's purchase and disposal of stocks in Deutsch Motors to be inappropriate and will seek disciplinary action against its leaders and a police investigation into the transactions.