SEOUL, Jan. 26 (Yonhap) -- South Korea and China agreed Wednesday to send prior notifications to each other in case of an exports ban on energy and key mineral resources, Seoul's industry ministry said.

The agreement was made during the fourth joint committee meeting of the South Korea-China Free Trade Agreement (FTA) held via teleconferencing attended by director-level trade officials, according to the Ministry of Trade, Industry and Energy.

During the talks, the two sides vowed to work together to minimize disruptions in their supply chains by sending prior notifications to each other if either side imposes an exports ban on energy and mineral resources.

South Korea is heavily dependent on China for supplies of urea and other raw materials.

The two sides also vowed to enhance cooperation on improving support for the entry of business travelers, the establishment of smooth shipping logistics chains and customs clearance, the ministry said.

During the meeting, the Seoul government raised the issue of the copyrights violation in China and called for Beijing's cooperation for better protection of its cultural content.

It also sought China's attention for the active advance of South Korean cultural items, such as films and games, into the Chinese market, the ministry said.

The two sides also assessed the achievements of the bilateral free trade deal, which came into force in December 2015.

Following the pact, two-way trade had surged 32.6 percent. Their trade volume, in particular, rose 24.8 percent on-year in 2021 to an all-time high of US$301.5 billion, according to government data.

"The two sides agreed that the FTA has helped boost their trade despite global economic difficulties amid the COVID-19 pandemic," the ministry said in a release. 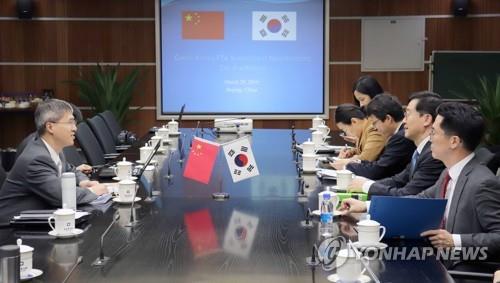 S. Korea, China agree to prior notices in case of resources exports ban

S. Korea, China agree to prior notices in case of resources exports ban