The Seoul Western District Court said the country's three major broadcasters -- MBC, KBS and SBS -- should not exclude Ahn of the People's Party from their TV debate for presidential candidates.

In a separate suit launched by Sim of the Justice Party, the Seoul Southern District Court also ruled that the TV networks cannot proceed with the debate without Sim's participation. 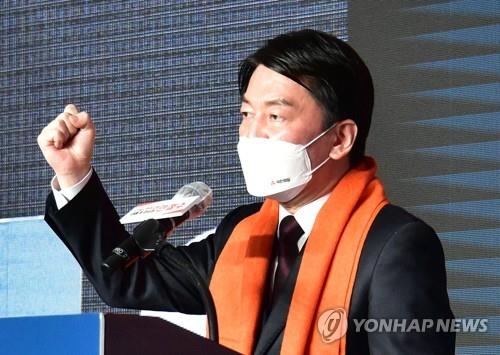 The ruling Democratic Party and the main opposition People Power Party have been in talks with the broadcasters to set up a TV debate exclusively between their presidential candidates, Lee Jae-myung and Yoon Suk-yeol, respectively, on either Sunday or Monday.

Ahn, who is running a distant third in public opinion polls after Lee and Yoon, filed for the injunction last week, claiming that such a two-way debate without him would be unfair and monopolistic. Sim also filed for a similar injunction.

The election law does not specify how broadcasters should select candidates for TV debates, but given the powerful influence of such debates, the leeway broadcasters have in deciding candidates should be limited, the Seoul Western District Court said.

"The broadcasters in this case stepped out of the limit at their discretion, as it is difficult to accept their justification (for excluding Ahn)," the court added.