SEOUL, Jan. 27 (Yonhap) -- South Korea's exports of cars and petroleum products are expected to grow solidly this year, but the outlook for steel, ships and other key items is gloomy, a poll showed Thursday.

According to the survey taken by the Federation of Korean Industries (FKI), outbound shipments of cars are projected to expand 6.2 percent this year from last year's US$46.5 billion.

The lobby for South Korea's family-controlled conglomerates attributed its upbeat prediction to improving consumer confidence across the globe and major countries' policies to expand the use of eco-friendly cars as part of efforts to achieve carbon neutrality.

Overseas shipments of gasoline and other oil products are projected to soar 14.7 percent from $38.2 billion a year earlier thanks to a rise in prices of liquefied natural gas. 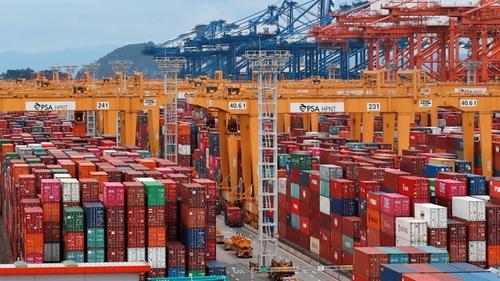 The FKI said export prices of petroleum goods are likely to increase this year thanks to China's August move to curb overseas shipments of those products by its companies.

Exports of steel products are forecast to shrink 8.5 percent in 2022 from last year's $36.4 billion due to a slump in China's property market and its economic slowdown.

Ship orders are predicted to tumble 19 percent this year from $42 billion in 2021 amid a manpower shortage facing the local shipbuilding industry.

Meanwhile, chip exports are expected to decline 2 percent in 2022 from last year's $128 billion due to possible price drops stemming from a supply glut.

Overseas shipments of display panels are projected to decrease 1.4 percent this year from last year's $21.4 billion due to a drop in global demand for TVs and China's growing share of the global OLED panel market, according to the survey.

Exports of cars, oil products forecast to be brisk this year

Exports of cars, oil products forecast to be brisk this year