In November 2020, South Korea inked the trade deal with 14 other countries -- 10 member nations of the Association of Southeast Asian Nations (ASEAN), China, Japan, Australia and New Zealand -- and the National Assembly ratified the pact in December last year.

It will come into force on Feb. 1, 60 days after the government submitted the parliamentary approval to the Secretariat, according to the Ministry of Trade, Industry and Energy.

RCEP is the world's biggest FTA, as the 15 member countries account for around 30 percent of the global gross domestic product, the world's population and trade volume, government data showed.

"The agreement is expected to help our companies' advance into overseas markets, as it expands the market for our key export items including steel and cars, as well as such service sectors as online game, animation, film, and record," the ministry said in a release.

The combined amount of South Korea's exports to the RCEP participants came to US$254.3 billion in 2020, taking up around half of the country's total outbound shipments, according to the data.

It is also the first free trade agreement that involves South Korea and Japan.

RCEP officially went into effect on Jan. 1, 2022, for some countries in accordance with a rule that it shall enter into force as at least six ASEAN and three non-ASEAN nations submit the ratification after wrapping up their due domestic procedures. 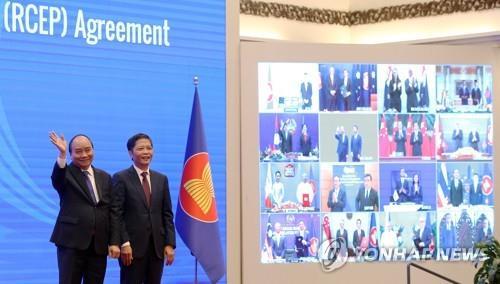 RCEP pact to take effect for S. Korea next month

RCEP pact to take effect for S. Korea next month