SEOUL, Jan. 27 (Yonhap) -- The presidential candidates of the ruling and main opposition parties are running neck and neck with support ratings of around 35 percent each, the latest surveys showed Thursday.

Lee Jae-myung of the liberal Democratic Party (DP) is in a dead heat with Yoon Suk-yeol of the conservative People Power Party (PPP) at 35 percent against Yoon's 34 percent, according to a poll of 1,000 adults conducted Monday to Wednesday by Embrain Public, Kstat Research, Korea Research and Hankook Research.

The gap between Lee and Yoon was within the margin of error of plus or minus 3.1 percentage points at a 95 percent confidence level.

Both Lee and Yoon gained 1 percentage point from a week earlier. 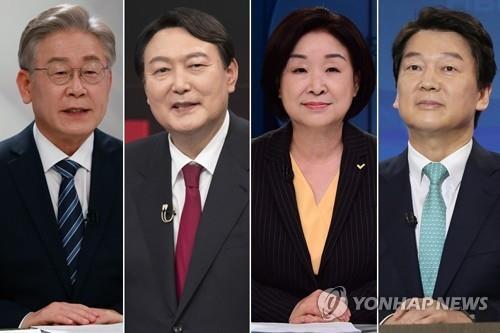 A separate survey conducted by Embrain Public on 1,001 adults on Monday and Tuesday found Yoon leading overall with 35.9 percent support against Lee's 33.5 percent.

The difference was also within the margin of error of plus or minus 3.1 percentage points at a 95 percent confidence level.

Yoon was up 6.6 percentage points from the previous survey conducted Dec. 26-27, while Lee was down 1.5 points.