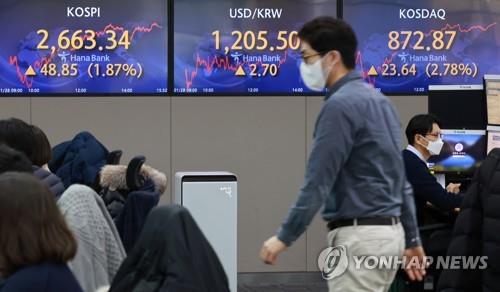 Stocks came off to a volatile start after the key stock index closed at a 14-month low the previous day due to the U.S. rate hike concerns and LG Energy Solution's crash upon its market debut.

After briefly plunging below the 2,600-point mark in the morning, the KOSPI rebounded on strong advances by chip and chemical heavyweights.

Stocks further gained ground in the afternoon as institutions and retail investors scooped up local stocks ahead of the three-day Lunar New Year holiday that starts Monday.

Among losers, LG Energy Solution, the second most valued stock on the main bourse, plunged 10.89 percent on its second day of trading.

The local currency closed at 1,205.5 won against the U.S. dollar, down 2.7 won from the previous session's close.

Bond prices, which move inversely to yields, closed higher. The yield on three-year Treasurys lost 2.8 basis points to 2.189 percent, and the return on the benchmark five-year government bond fell 3.6 basis points to 2.396 percent.