SEOUL, Jan. 28 (Yonhap) -- K-pop superband BTS has been nominated for three prizes at this year's iHeartRadio Music Awards, one of the American music industry's awards.

The septet was recognized for Best Duo/Group of the Year, Best Fan Army and Best Music Video for its 2021 megahit single "Butter."

For Best Duo/Group of the Year, the South Korean group will compete against global stars such as Silk Sonic, a duo of Bruno Mars and Anderson .Paak, Maroon 5, AJR and Dan + Shay.

Last year, BTS was nominated for three honors and took home two -- Best Fan Army and Best Music Video for its 2020 hit "Dynamite." It was the fourth consecutive time for the group to win an award from the annual event since 2018.

This year's awards ceremony will be held on March 22 in Los Angeles. 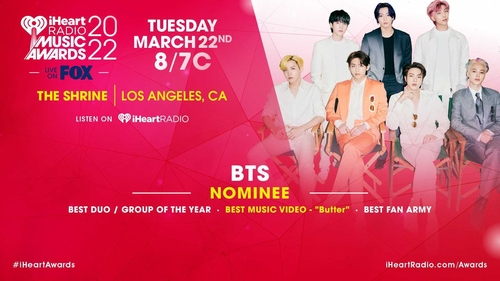