SEOUL, Feb. 1 (Yonhap) -- South Korea's exports soared 15.2 percent in January from a year earlier on the back of brisk demand for chips, but the monthly trade deficit hit a record high due to high energy prices, data showed Tuesday.

Outbound shipments stood at US$55.32 billion last month, compared with $48 billion a year earlier, marking the 15th consecutive month of rise, according to the data compiled by the Ministry of Trade, Industry and Energy.

It is the highest figure for any January since the ministry began compiling the related data in 1956. The previous record was set in January 2018 when the figure came to $49.2 billion.

"The monthly exports marked double-digit growth despite the spread of the omicron COVID-19 variant, high prices of raw materials, and a high base effect," the ministry said in a release.

By segment, shipments of semiconductors, a key export item, jumped 24.2 percent in January from the previous year. Chips accounted for about 20 percent of exports by South Korea, home to Samsung Electronics Co., the world's largest memory chip maker, and its smaller rival SK hynix Inc.

Sales of petrochemicals advanced 40 percent and steel exports spiked 50.1 percent, according to the data. 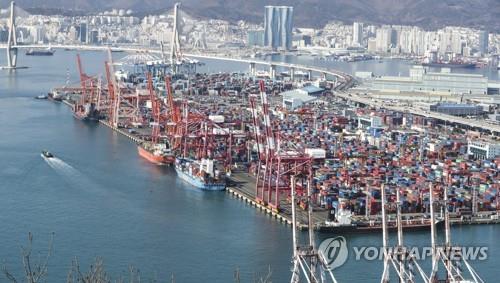 It is the second straight month that the country recorded a trade deficit.

The growth in demand is common among major nations amid an economic recovery. Japan, France, and the U.S. have also logged trade deficits recently, it added.

Industry Minister Moon Sung-wook said this year's trade circumstances are far from unfavorable, given such risk factors as soaring raw materials prices and geopolitical instability, and vowed to extend active backing to exporters.

Last year, the country's exports rose 25.8 percent on-year to reach an all-time high of $644.54 billion on the back of solid demand for chips and petroleum products amid a global economic recovery.