The asset value of publicly placed stock funds stood at 82.7 trillion won (US$68.4 billion) as of Thursday, down 8.37 trillion won, or 9.2 percent, from the previous month, according to the data compiled by the Korea Financial Investment Association (KOFIA). 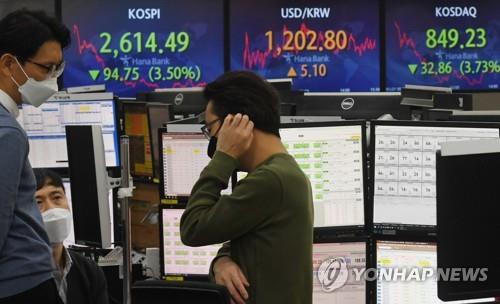 The monthly net asset fall in January marks the first in four months after a 2.2-percent drop in September last year.

The net asset value of funds that invest in local stocks suffered a 11.5 percent dip to 53.35 trillion won in January from a month earlier, while that of funds that are focused on overseas stocks fell 4.7 percent on-month to 29.36 trillion won.

Stocks crashed at home and in most major markets, as investors are bracing for hawkish comments by the U.S. Federal Reserve, particularly about its recent call to raise the key interest rates, to reign in the fast-growing inflation pressure.