JEJU, South Korea, Feb. 3 (Yonhap) -- Tourist arrivals on the southern resort island of Jeju surged over 30 percent from a year ago during the just-ended Lunar New Year holiday, industry data showed Thursday, amid mounting concern about the spread of the omicron variant.

According to the data from Jeju's tourism association, 203,437 visitors arrived on Jeju during the extended holiday, which ran from Saturday to Wednesday, marking an increase of 32.9 percent from 153,132 visitors during last year's Lunar New Year holiday. 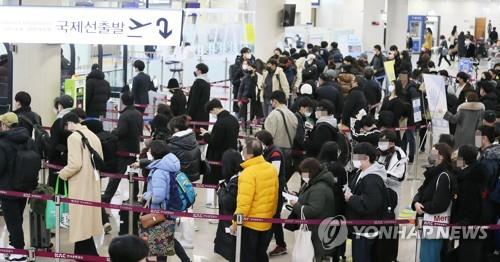 Traditionally, many South Koreans visit their hometowns or travel during the holiday. As the nation has posted five-digit daily tallies of COVID-19 over the past week, however, the government has urged the public to refrain from traveling during the holiday.

Association officials speculate that travel sentiment was heightened due to the extended holiday, and individual and group tours increased due to the easing of private gathering restrictions.

The quarantine authorities are nervous, as the number of daily confirmed cases of COVID-19 on Jeju reached new records every day and surpassed 100 during the holiday. Jeju's record high daily number jumped from 86 on Monday to 122 on Tuesday and 124 as of 5 p.m. on Wednesday.