SEOUL, Feb. 4 (Yonhap) -- South Korean stocks climbed more than 1 percent on Friday, extending their winning streak to a third day, on the back of strong U.S. futures and tech gains. The Korean won rose against the U.S. dollar. 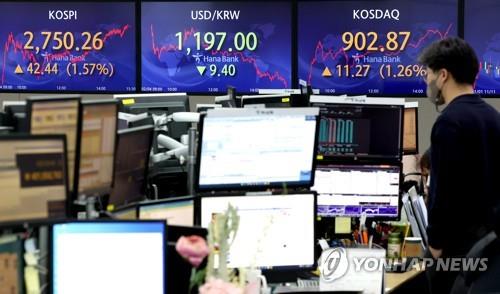 Trading volume was moderate at about 527 million shares worth some 11.1 trillion won (US$9.3 billion), with gainers far outnumbering losers 767 to 122.

Stocks got off to a bullish start despite overnight losses on Wall Street following the "earning shock" of Facebook's parent company.

The local currency closed at 1,197 won against the U.S. dollar, up 9.4 won from the previous session's close.

Bond prices, which move inversely to yields, closed lower. The yield on three-year Treasurys added 3.6 basis points to 2.194 percent, and the return on the benchmark five-year government bond was up 4.5 basis points to 2.418 percent.
(END)