SEOUL, Feb. 4 (Yonhap) -- South Korean quarantine officials began culling about 33,000 chickens Friday as they confirmed the outbreak of the H5N1 avian influenza virus at a farm, the agricultural ministry said.

The latest case of the highly pathogenic bird flu was reported at a chicken farm in Cheonan, a city located some 92 kilometers south of Seoul, according to the Ministry of Agriculture, Food and Rural Affairs.

The ministry said it issued a 48-hour standstill order on all poultry farms, feed plants and slaughter houses as well as related vehicles across the country starting on 3 p.m. Friday. A violator can face up to one year in prison or fines of up to 10 million won (US$8,300).

It marked the 31st case of a highly pathogenic strain of H5N1 found at poultry farms in South Korea since Nov. 8.

Highly pathogenic avian influenza is very contagious among birds and can cause severe illness and even death, especially in domestic poultry.

The disease naturally circulates among wild birds, but it can be spread to domestic poultry when they migrate to other regions in winter, according to the authorities. 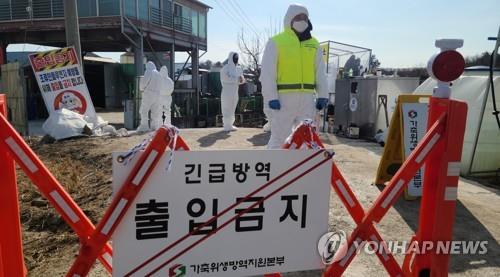