SEOUL, Feb. 4 (Yonhap) -- A Seoul court issued an arrest warrant Friday for a former opposition lawmaker accused of accepting bribes in the form of severance pay for his son from an asset firm at the center of a massive development corruption scandal.

Kwak Sang-do, the former two-term lawmaker of the main opposition People Power Party, was charged with receiving 5 billion won (US$4.17 million) of graft from Hwacheon Daeyu Asset Management in the name of severance pay for his son, who had worked at the company for about six years.

In exchange for the money, Kwak allegedly helped Hwacheon Daeyu form a consortium to carry out a project to develop the Daejang-dong district in the city of Seongnam, south of Seoul, into an apartment complex in 2015.

Prosecutors have looked into how the asset management firm was able to reap unreasonably massive profits from the project, and arrested key suspects, including the firm's owner, on breach of trust, bribery and other charges.

The corruption scandal has received intense media coverage as the project was carried out when Lee Jae-myung, presidential candidate of the ruling Democratic Party, was mayor of Seongnam and some of his former aides were arrested. 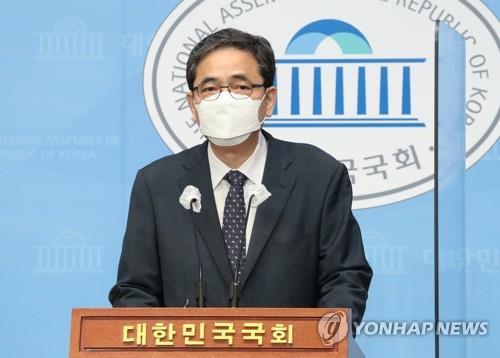