SEOUL, Feb. 6 (Yonhap) -- With the presidential election just 30 days away, South Korea's election watchdog is hastening its preparations for the March 9 vote amid a surge in daily COVID-19 infections driven by the highly contagious omicron variant.

According to the National Election Commission (NEC), political parties' presidential candidates have to formally register on Feb. 13 and 14.

The candidates' official 22-day campaign period is set to kick off on Feb. 15.

Three rounds of TV debate among candidates have been scheduled during the official campaign period.

Starting Monday, gatherings of political party members will be banned under an election law.

Overseas Korean citizens who are registered as absentee voters will cast their votes on Feb. 23-28.

Sailors will cast their votes aboard their ships from March 1-4.

It is not the first South Korean election to be held during the pandemic, but the upcoming vote comes as the nation grapples with a surge in daily COVID-19 cases.

The NEC has said it is looking for solutions that allow people who have contracted COVID-19 after the early voting period to cast their ballots in the March election. 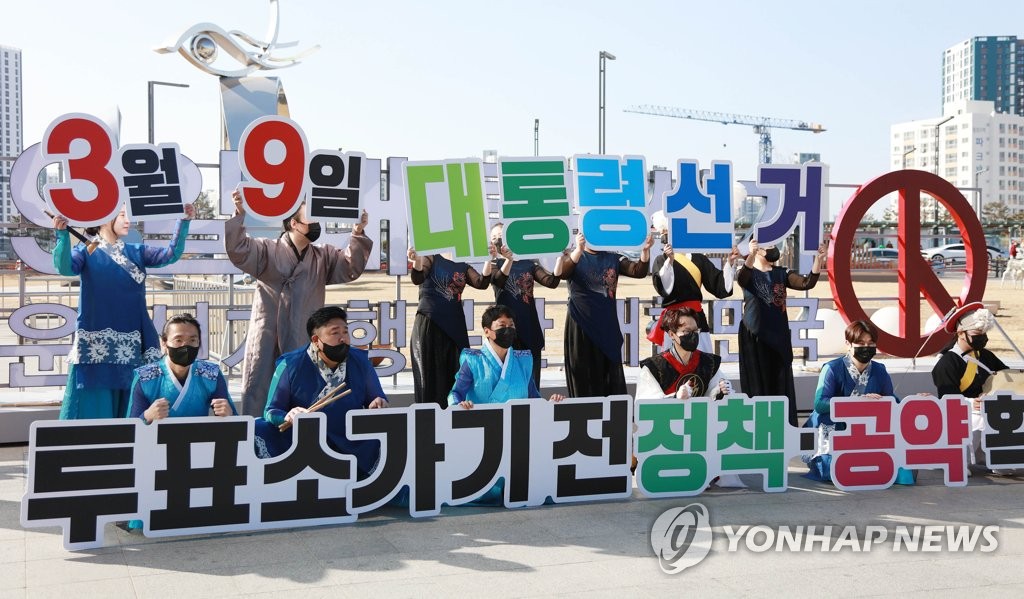 Under current election rules, it is practically impossible for those who are diagnosed with COVID-19 after the advance voting period that falls on March 4-5 and people who go into self-isolation just before the March 9 election to cast their votes.

People who test positive for the novel coronavirus can cast their votes by mail in the presidential election only if they apply for a mail-in ballot between Wednesday and Feb. 13.

For those who are infected with COVID-19 after Feb. 13, they can vote through special polling stations at residential virus treatment centers during the early voting period.

However, officials have yet to come up with solutions for people who test positive for COVID-19 after the advance voting period. The polling stations at residential virus treatment centers are not scheduled to open March 9.

The NEC is also trying to figure out ways for people to vote who have come into close contact with virus patients.

Even if they are vaccinated, those who have had close contact with COVID-19 patients are required to isolate for seven days. If their self-isolation period does not end before the March 9 election, they are not allowed to vote in person at polling stations.

Experts warn that the ongoing virus situation may affect hundreds of thousands of voters on Election Day.

Presidential candidates to register with election watchdog on Feb. 13-14

Presidential candidates to register with election watchdog on Feb. 13-14