In a Facebook post, the USFK showed a series of photos depicting him looking at a set of formidable weapons systems, like the Joint Direct Attack Munitions (JDAMs), during his visit to the 8th Fighter Wing at Kunsan Air Base in the western city of Gunsan on Friday.

The apparent show of American military heft came as Pyongyang has carried out a series of missile launches, including the test-firing of what it called an intermediate- and long-range ballistic missile on Jan. 30.

"They visit (the unit) to ensure our formations remain disciplined, focused and maintain a high level of 'fight tonight' readiness so we can fulfill our obligation to protect and defend the Republic of Korea against any threat or adversary," the USFK wrote on Facebook. 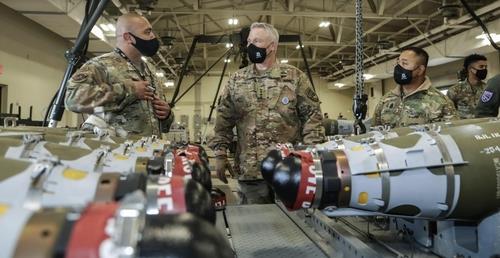 Though the USFK said the commander "routinely" visits such U.S. installations in South Korea, his trip apparently served as a message of deterrence against potential North Korean provocations, observers said.

In yet another display of American airpower, a U.S. Air Force photo, posted on the Defense Visual Information Distribution Service, showed a KC-135 aerial refueling plane engaging in a training session near Osan Air Base in Pyeongtaek, 70 kilometers south of Seoul, last Wednesday.

An aerial tanker is required for longer-distance military operations in a potential contingency on the Korean Peninsula.

Speculation has lingered that the North could stage yet another show of force, including an intercontinental ballistic missile (ICBM) launch, particularly in time for its key political events -- the 80th birthday of current North Korean leader Kim Jong-un's late father, Kim Jong-il, on Feb. 16 and the 110th birthday of his late grandfather Kim Il-sung on April 15.

On Monday, Beyond Parallel, a project of the U.S.-based Center for Strategic and International Studies, issued an analysis report on a North Korean missile base close to the border with China, which it said could house a regiment-sized unit equipped with ICBMs.

Citing recent satellite imagery, the report said that should operational ICBMs not become available in the near term, the North is likely to deploy intermediate-range ballistic missiles to the site in Hoejung-ri in the northwestern province of Jagang.