SEOUL, Feb. 9 (Yonhap) -- The Chinese Embassy here issued a rare public statement in response to fury among South Koreans over the "appropriation" of "hanbok," the traditional Korean attire, and deepening anti-China sentiment.

A woman, dressed in hanbok, appeared during last week's opening ceremony of the Beijing Winter Olympics, representing an ethnic minority of China, called "joseonjok." She was part of those representing 56 ethnic groups of China carrying the Chinese national flag into the stadium.

The scene, broadcast worldwide, sparked uproar among many South Koreans who view it as demonstrating China's longtime attempts to distort shared history and steal Korean culture, including their signature dish, kimchi, as well as hanbok. Local online sites often used by the younger generation, in particular, have been flooded with messages criticizing China for trying to "loot" Korean culture.

The embassy rebutted the latest hanbok-related accusations and defended the depiction of hanbok during the Olympic event. It described such accusations as nonsense.

"It is their desire and right for representatives of each ethnic group in China to attend an international sports competition and the major national event of the Beijing Winter Olympics, wearing their traditional costumes," the embassy's spokesperson said in a statement Tuesday.

The official stressed that the joseonjok in China and Koreans, both in the South and the North, have the same "lineage" and common traditional culture, including clothing.

China respects Korea's historical and cultural traditions, the official added, expressing hope that "The South Korean side will also respect the emotions of China's ethnic minorities, including joseokjok." In Korean, joseon means an ancient Korean dynasty and jok means tribe.

Meanwhile, a top U.S. Embassy official expressed his own view on hanbok in public.

"What comes to mind when you think of Korea? Kimchi, K-Pop, K-dramas…and of course Hanbok," Christopher Del Corso, charge d'affaires ad interim at the U.S. Embassy in Seoul, tweeted Tuesday under the hashtag of #OriginalHanbokFromKorea, coupled with photos of himself wearing hanbok. 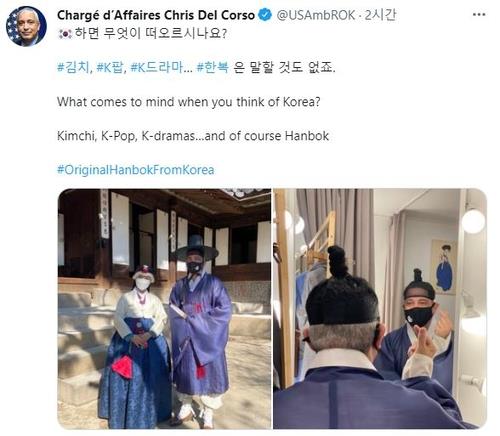