SEOUL, Feb. 9 (Yonhap) -- The first batch of self-driving taxies in Seoul will go into service in the city's western region this week, the city government said Wednesday.

Any passenger can call one of the taxies on the smartphone application TAP! at the fixed fare of 2,000 won (US$1.67) per ride, automatically payable on the application.

Circling two separate commercial areas in the district, the vehicles will pick up and drop passengers at any point along the routes, preset on the application, according to the Seoul city government.

Next month, the city also plans to launch self-driving buses in the area. Including them, the city is seeking to operate up to 12 autonomous public transportation vehicles in the Sangam-dong district, the zone for the city's autonomous vehicle experiment project, by the end of this year.

The application is downloadable on Google Play Store or Apple's App Store starting Thursday. As part of launch promotions, those who use the new service for the first time will be given a free ride, the city added. 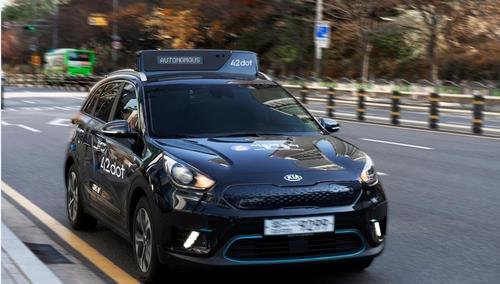 Self-driving taxies set to go into service in western Seoul

Self-driving taxies set to go into service in western Seoul