The talks among Defense Minister Suh Wook and his U.S. and Japanese counterparts -- Lloyd Austin and Nobuo Kishi -- followed a series of the North's missile tests, including the launch of an intermediate-range ballistic missile (IRBM) on Jan. 30.

Under the Joe Biden administration, the U.S. has been stepping up efforts to reinforce trilateral security cooperation with its key Asian allies, South Korea and Japan, as it confronts an assertive China, a muscle-flexing Russia and an intransigent North Korea.

"The three ministers agreed that the three countries will closely cooperate in the face of North Korean missile threats and continue efforts to achieve the goal of the denuclearization of the Korean Peninsula," the ministry said in a press release.

The 30-minute phone talks proceeded with a focus on sending a "coordinated message" by the three countries against the North's security threats, a Seoul official told reporters on condition of anonymity.

The defense chiefs also agreed to meet in person at a "mutually agreed-upon" date, the ministry said. The three-way talks could happen in Hawaii next month, according to media reports.

At the meeting, Suh called the recent series of North Korean missile tests a "direct and serious threat" to South Korea and a "challenge to U.N. Security Council (UNSC) resolutions."

The North is barred from conducting any launches using ballistic missile technology under UNSC resolutions.

Suh also said that Seoul plans to strengthen both independent defense capabilities and those anchored in the "solid" U.S.-South Korea alliance to counter Pyongyang's nuclear and missile threats.

At the talks, Austin reaffirmed its "ironclad" commitment to the defense of South Korea, according to the ministry.

Regarding the prospects of the North's additional provocations, Austin expressed concerns, while Kishi made Tokyo's usual mention of the need for the "complete, verifiable, irreversible denuclearization" of the North, the Seoul official said.

The defense talks came before the top diplomats of the three countries plan to meet trilaterally in Hawaii on Saturday to discuss joint efforts to deal with the North.

Suh, Austin and Kishi had initially considered holding the three-way talks in Hawaii last month but postponed them due to the spread of the omicron variant.

The three countries last held an in-person trilateral defense ministerial meeting on the margins of security talks involving the Association of Southeast Asian Nations in Bangkok in November 2019. 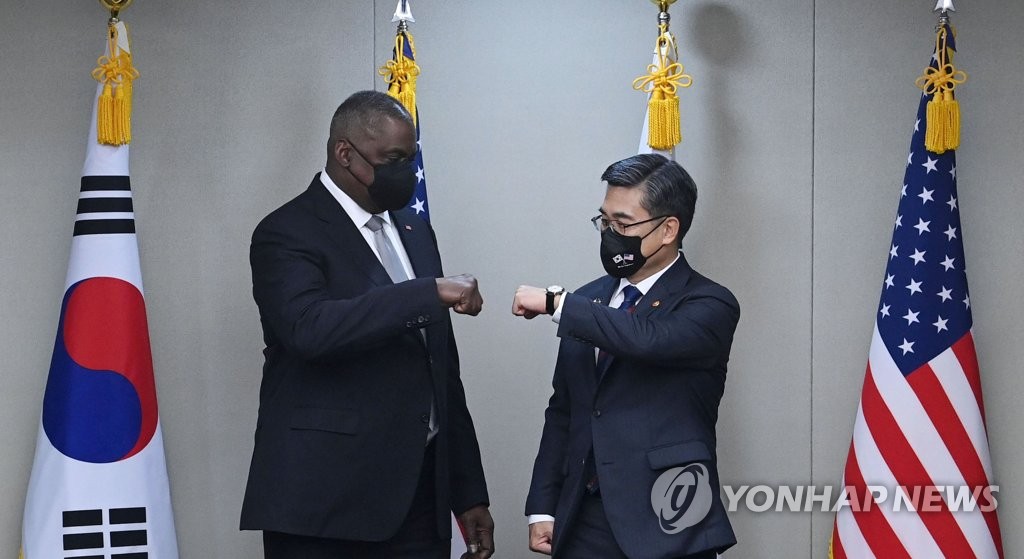