The country's outbound shipments stood at US$15.7 billion in the Feb. 1-10 period, compared with $17.97 billion the previous year, according to the data from the Korea Customs Service.

The decline came as an extended Lunar New Year holiday reduced the number of working days during the cited period by two days compared with last year. Lunar New Year this year fell on Feb. 1 and the holiday lasted until the following day.

Per-day exports, however, rose 14.2 percent on-year during the first 10 days, the data showed.

Imports also went down 6.6 percent on-year to $19.20 billion during the cited period, resulting in a trade deficit of $3.51 billion, according to the data. 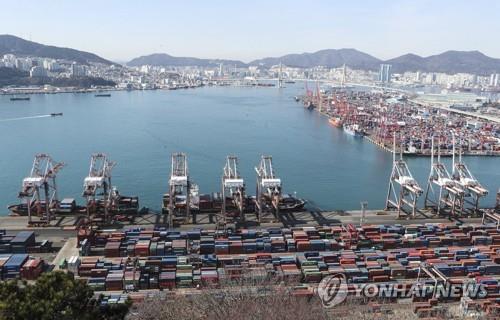 But shipments of autos dived 47.5 percent and auto parts logged a 35.2 percent decline, the data showed.

By country, shipments to China, South Korea's largest trading partner, fell 3 percent on-year, and those to the United States tumbled 17.3 percent. Exports to the European Union also decreased 33.5 percent during the period.

Exports, which account for half of the economy, grew 15.2 percent on-year in January, extending their gains to the 15th consecutive month.

The government earlier forecast exports will remain robust in 2022, but the growth pace will slow due to a high base effect. The finance ministry expects overseas shipments to grow 2 percent this year.