SEOUL, Feb. 11 (Yonhap) -- An ongoing whirlwind of U.S. diplomacy with South Korea and Japan appears to be driving home an unequivocal message to North Korea and China: Deterrence, based on regional alliances, will not wane even if a Russia-Ukraine standoff gobbles up America's attention.

The flurry of dialogue comes as Washington and its European allies are preoccupied with finding a diplomatic off-ramp to defuse the security crisis between Moscow and Kiev triggered by Russia's monthslong troop buildup on the border with Ukraine.

"The U.S.' stepped-up diplomacy with Seoul and Tokyo is sending an unspoken message: Although Washington is heavily consumed with the Ukraine crisis, its military might, backed by the allies, must not be underestimated," Kim Tae-hyung, professor of international politics at Soongsil University, said.

The U.S.' focus on the Russia-Ukraine standoff has raised questions over whether America can immediately shift or reapportion its military and diplomatic resources in support of South Korea and Japan if North Korea's nuclear and missile threats get out of hand.

Last month alone, the North conducted seven known rounds of missile tests, including the launch of an intermediate-range ballistic missile, in the midst of lingering doubts over the credibility of America's security commitments to the Asian allies.

The doubts have continued to surface as Washington appears inclined to avoid overseas military entanglements to focus on a raft of domestic challenges and its increasingly acrimonious rivalry with Beijing, as seen in its chaotic troop pullout from Afghanistan last year, observers said.

The American credibility issue also stems in part from what experts call the Pentagon's "one-plus" strategy, under which it seeks to win in one major war while deterring another in another region -- compared with its erstwhile concept of fighting and winning "two major regional conflicts."

However, Biden's repeated defense assurances appear to have allayed allies' security concerns to a certain extent.

Since taking office a year ago, the Biden administration has called its regional alliances America's "greatest strategic assets" while noting they had "atrophied" under the former Donald Trump administration, much criticized for its transactional approach to the allies.

This week, U.S. Defense Secretary Lloyd Austin reaffirmed the U.S.' "ironclad" commitment to Seoul and Tokyo in a call with his South Korean and Japanese counterparts, Suh Wook and Nobuo Kishi, respectively, according to Seoul's defense ministry.

The "ironclad" commitment has already become an oft-repeated expression in the U.S. diplomatic lexicon.

"Special Representative Kim also reaffirmed the U.S. commitment to the complete denuclearization of the Korean Peninsula and our ironclad commitment to the defense of the ROK (Republic of Korea) and Japan," U.S. State Department spokesperson Ned Price said earlier this month.

Price was referring to the U.S. top nuclear envoy's separate phone calls with his South Korean and Japanese counterparts, Noh Kyu-duk and Takehiro Funakoshi. The three were set to meet trilaterally in Honolulu on Thursday (U.S. time). 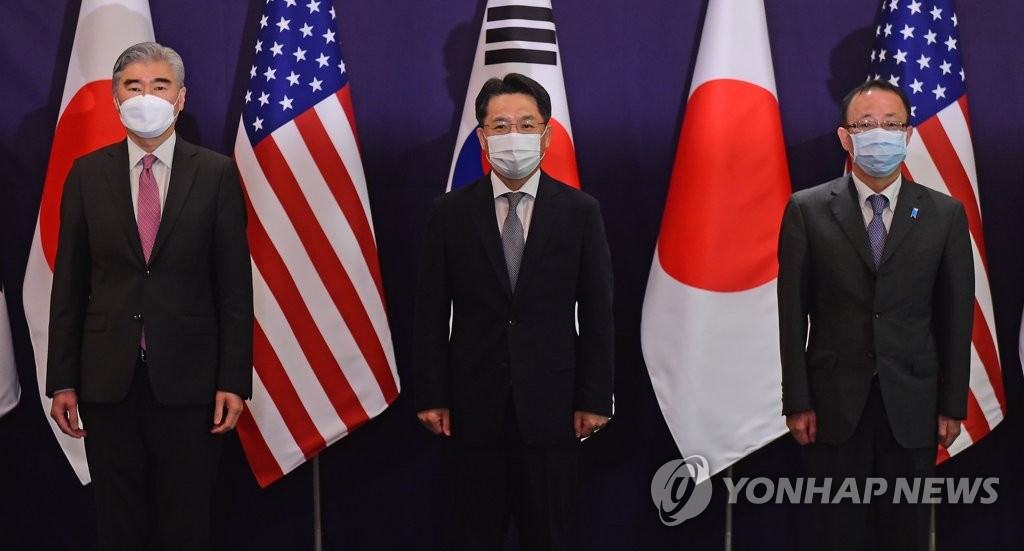 The Ukrainian crisis showed no visible signs of abating despite Washington's repeated warnings of crippling economic sanctions on Russia and of the "enormous human cost" associated with Russia's potential incursion.

Such warnings came as the U.S. has much at stake in the standoff though Ukraine is not America's treaty ally.

A Russian invasion could mean a deterrence failure for the U.S. that might reveal another sign of relative American decline, analysts said. How the U.S. deals with the standoff could also affect the level of confidence the U.S. allies place on America.

"Korea, Taiwan and Ukraine are individual issues, but they're connected. How Ukraine is handled by the U.S. and NATO, I think, sets conditions and expectations for great-power competition going forward, former U.S. Forces Korea chief Curtis Scaparrotti told a recent security forum hosted by the Institute for Corean and American Studies.

"I think that Xi (Jinping of China) and Kim Jong-un and Iran's supreme leader are all going to be watching this as closely as our allies," he added.

The U.S. drive to knit back together regional alliances faces one constant hurdle: a deep-seated historical animosity between South Korea and Japan.

It has recently further deepened as Japan is pushing to list a mine linked to wartime forced labor as a UNESCO World Heritage Site in a bid that South Koreans believe highlights its lack of atonement for colonial-era atrocities.

The latest tussle over the mine on Japan's Sado Island added to a litany of thorny issues between the two countries, including Tokyo's persistent claims to Korea's easternmost islets of Dokdo, its wartime sexual slavery and its planned discharge of tainted nuclear plant water into the ocean.

"Despite historical tensions, Japanese security officials may increasingly feel the need to cooperate with South Korea in countering North Korean missile threats, and the U.S. might want to seize on that momentum to help the allies patch things up," Nam Chang-hee, professor of international politics at Inha University, said.