SEOUL, Feb. 11 (Yonhap) -- Paul Schneiss, a German pastor who made the world aware of pro-democracy movements in South Korea during the 1970s and '80s, died Friday at the age of 88, the state-funded Korea Democracy Foundation said.

Schneiss is well known for requesting German journalist Jurgen Hinzpeter in 1980 to film the military's bloody crackdown on protesters in the southwestern city of Gwangju. The report was broadcast worldwide, making the landmark event in the nation's democracy known to the outside world.

"Despite many difficulties during the harsh military governments, he persistently supported Korea's democratization movement and promoted it to the world," the foundation said.

While staying in Japan as a missionary between 1975 and 1984, he actively backed South Korean activists fighting the Park Chung-hee and Chun Doo-hwan administrations.

He attended court trials involving opponents of Park's dictatorial regime to encourage the democracy fighters and show international solidarity with them. 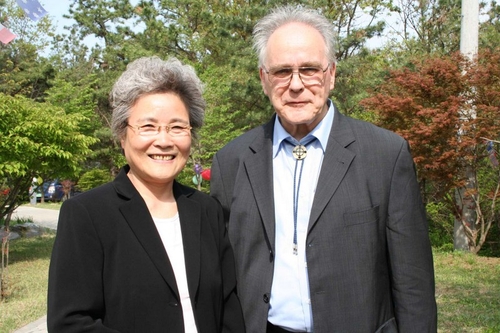 In 1975, he arranged the publication of a series of columns on South Korea in the Japanese monthly magazine "Sekai." Written by Korean professor Ji Myung-gwan at a Tokyo university, the articles helped expose Park's human rights repression to the world.

Schneiss was barred from entering South Korea by the Park government in December 1978.

In May 1980, he was informed of the Gwangju uprising by his Japanese wife, Kiyoko, who was traveling to Seoul at the time.

People in the city rose up against the ruling junta led by Chun Doo-hwan, who seized power though a coup on Dec. 12, 1979, 1 1/2 months after Park was assassinated by his spy chief. Chun's military brutally cracked down on the protestors, killing about 200 people and injuring thousands during the 10 days of armed resistance.

Schneiss immediately shared the news with German journalists in Japan, including Hinzpeter of the broadcaster NDR.

Hinzpeter flew to Gwangju and recorded the bloodshed. His footage was delivered to Germany and broadcast worldwide.

Hinzpeter died in 2016. The story of the journalist and a taxi driver who helped him was made into a hit South Korean movie, titled "A Taxi Driver," in 2017.

Schneiss and his family continued to engage in collecting information and writing to reveal the truth of Gwangju and later donated related records to the South Korean government.

He was honored in 2011 by a civic group in Gwangju and received awards last year from the South Korean government and the May 18 Memorial Foundation for his contributions to the nation's democracy.
(END)