The official Korean Central News Agency (KCNA) said North Korea broke ground in the Hwasong area Saturday on the second part of the housing project and Kim delivered a speech at the ceremony.

"The construction of 10,000 flats in the Hwasong area, one of the top priority tasks facing the construction sector this year, is not only the second project for carrying out the long-term goal for housing construction in Pyongyang City, a long-cherished plan of the Party whose implementation started last year, but also the first-stage construction for turning the area into a new modern town," Kim said.

"The construction units deployed in the Hwasong area would dedicate all their wisdom, enthusiasm and high spirit to the sacred construction campaign by taking the lead in the campaign and becoming examples to the builders of other construction sites," he said. 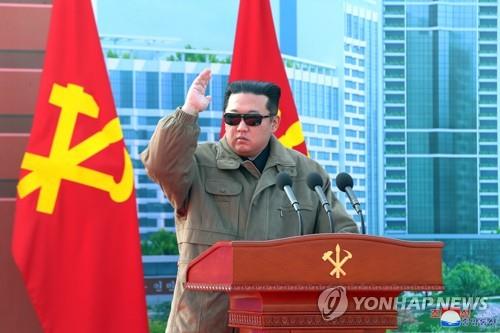 At the eighth congress of the ruling Workers' Party meeting last year, North Korea announced its aim of building 50,000 apartments in Pyongyang by 2025, or 10,000 units each year.

A groundbreaking ceremony for the first stage of the project to build 10,000 homes in the eastern Pyongyang was held in March last year, with Kim also attending, and the apartment complex is now reportedly in the final stage.